Methods Covered in this Workflow:

This workflow demonstrates how to realistically turn a building photo taken in the day into a night photo with rain, reflection, and additional scene elements. Emphasis will be placed on the use of layer masks as essential editing tools that overlay rather than corrupt the original image. 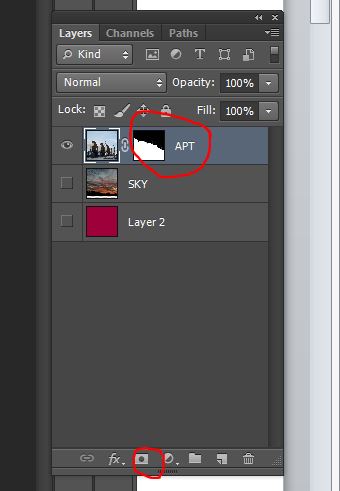 When you use a layer mask to edit an image you are not actually changing the original image, rather you are placing an overlay that allows you to hide, show, and create effects to your image.

We will replace our day sky in the layer mask using “selective color”, found under the “select” drop down menu -> “color range” . Holding shift click several points in the sky. You will notice that these areas turn black in the “color range” editor, meaning they are masked from the scene. Once the sky is removed click “ok.” 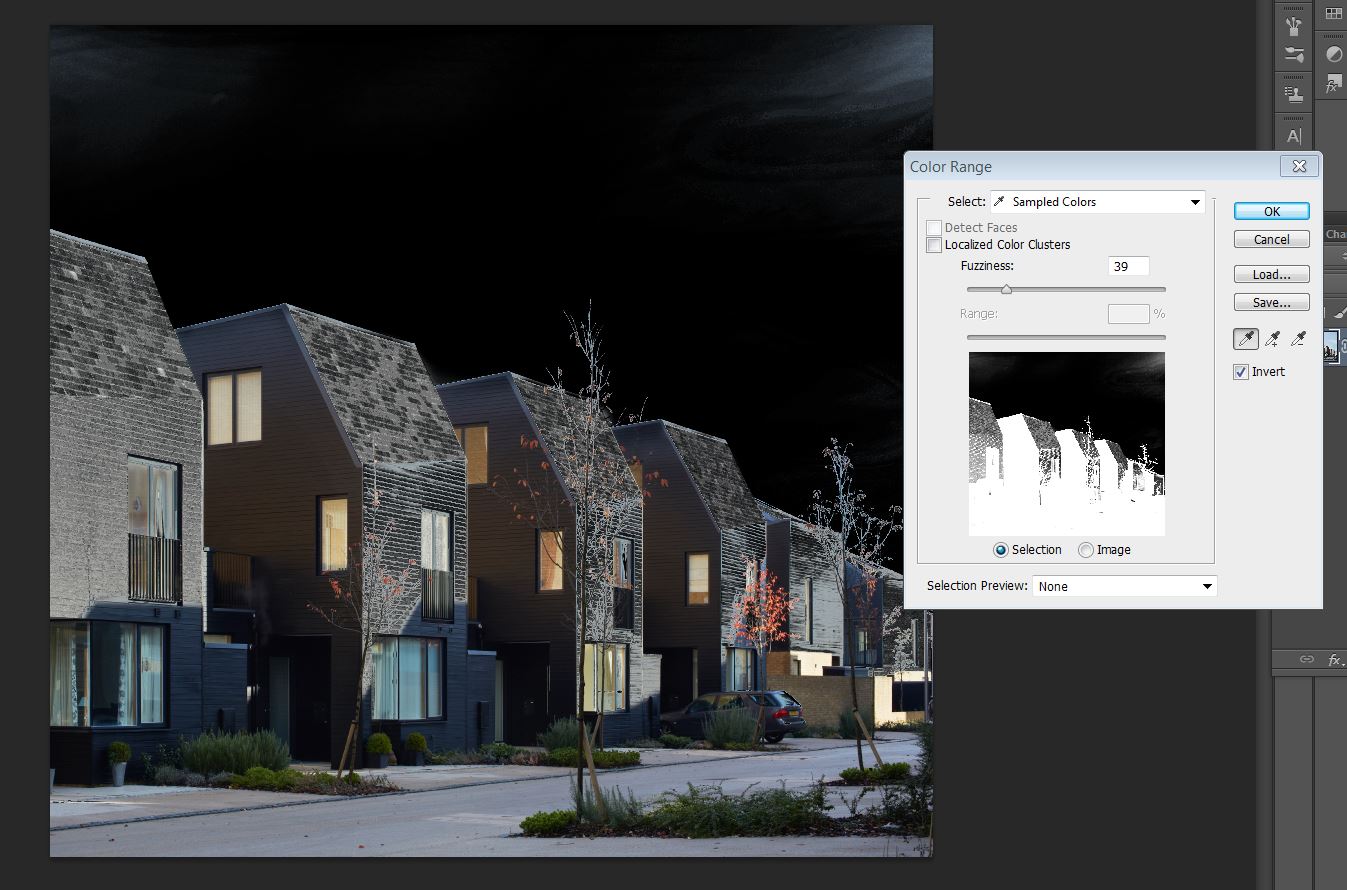 It is difficult to see how well your layer mask is working with Photoshop’s default checkered background. Create a brightly colored layer under your image layer to refine the sky layer mask. 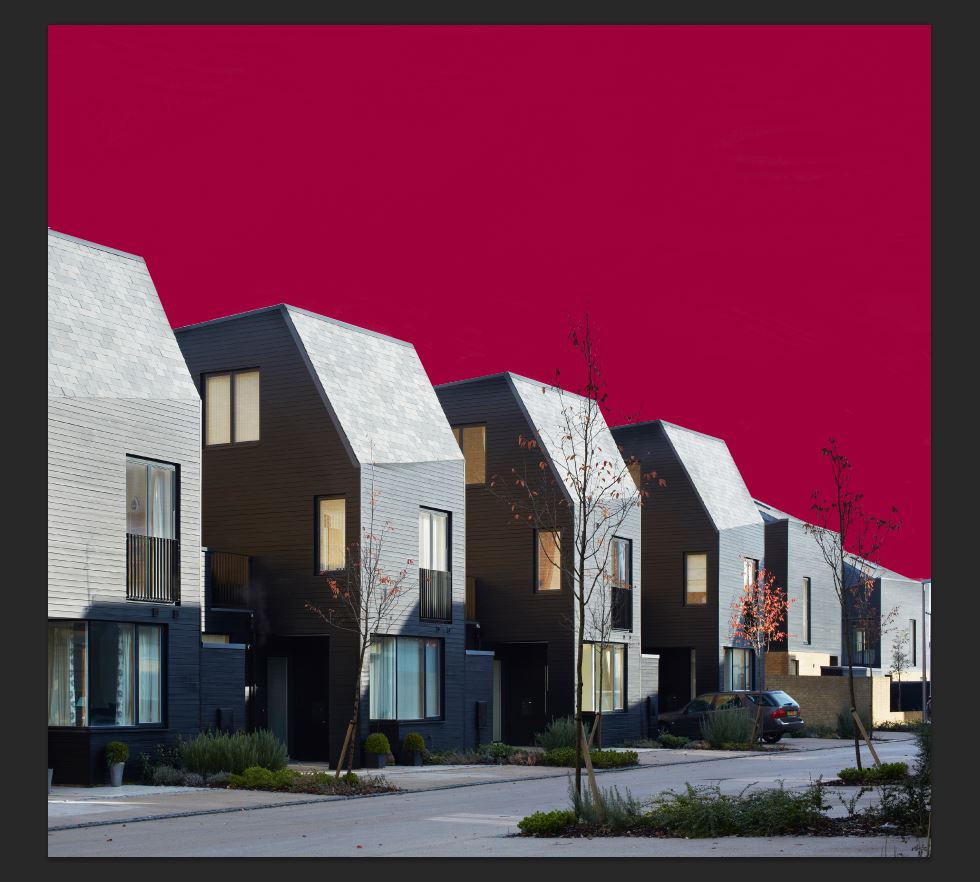 After doing this you will notice that the layer mask has also removed a significant part of the buildings. Also, bits of the sky along the edges have not been removed. By painting with BLACK in the layer mask we can remove unwanted parts of the sky. By painting with WHITE we can bring back parts of the building that have been removed. When painting large areas with WHITE or BLACK it is helpful to use the “lasso selection” and “magic wand” tools so that you are working in areas with hard edges.

At this point your buildings and sky should be correct, however organic areas such as trees and hedges tend to have a white “fringe” which can be fixed using the clone stamp tool. 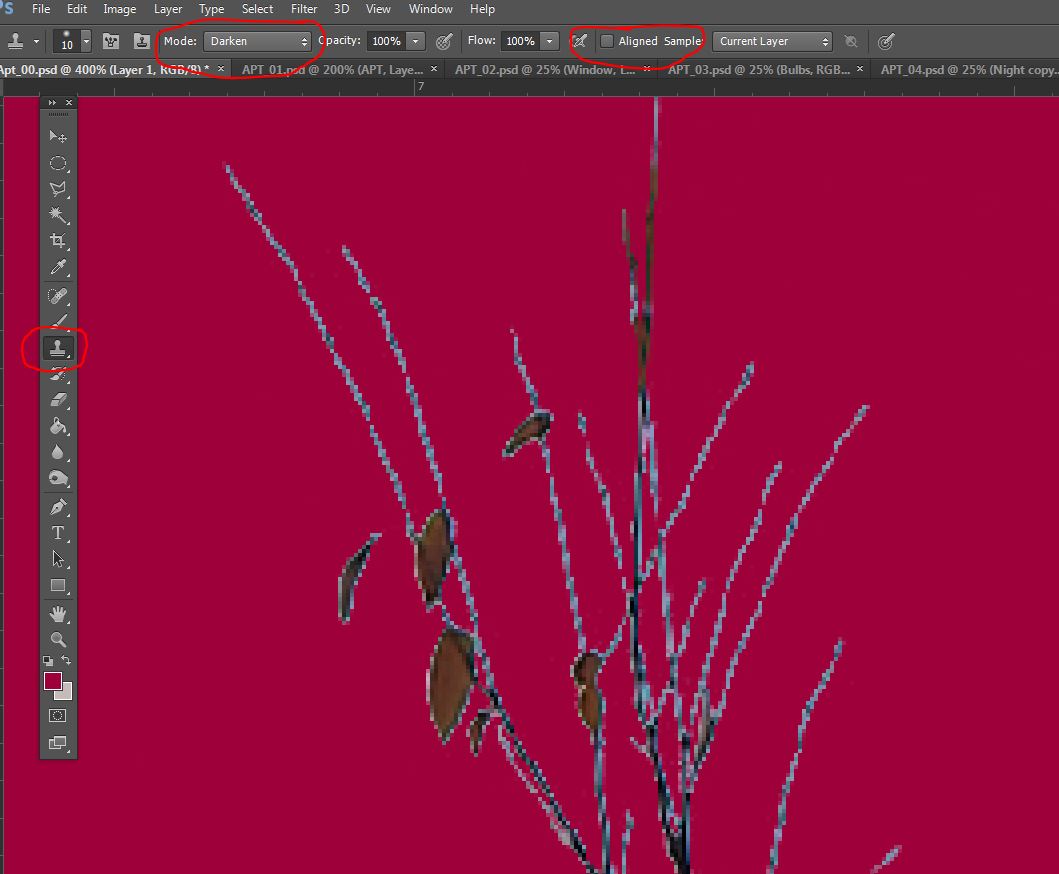 First, create a new blank layer, with the same layer mask as the town houses. At the top of the screen change “mode” to “darken”, uncheck “aligned sample”, and select "sample all layers". Alt + click on PC, Command + click on MAC to sample the area you will use to cover the white fringe, then click to cover the light areas with the new darker texture. 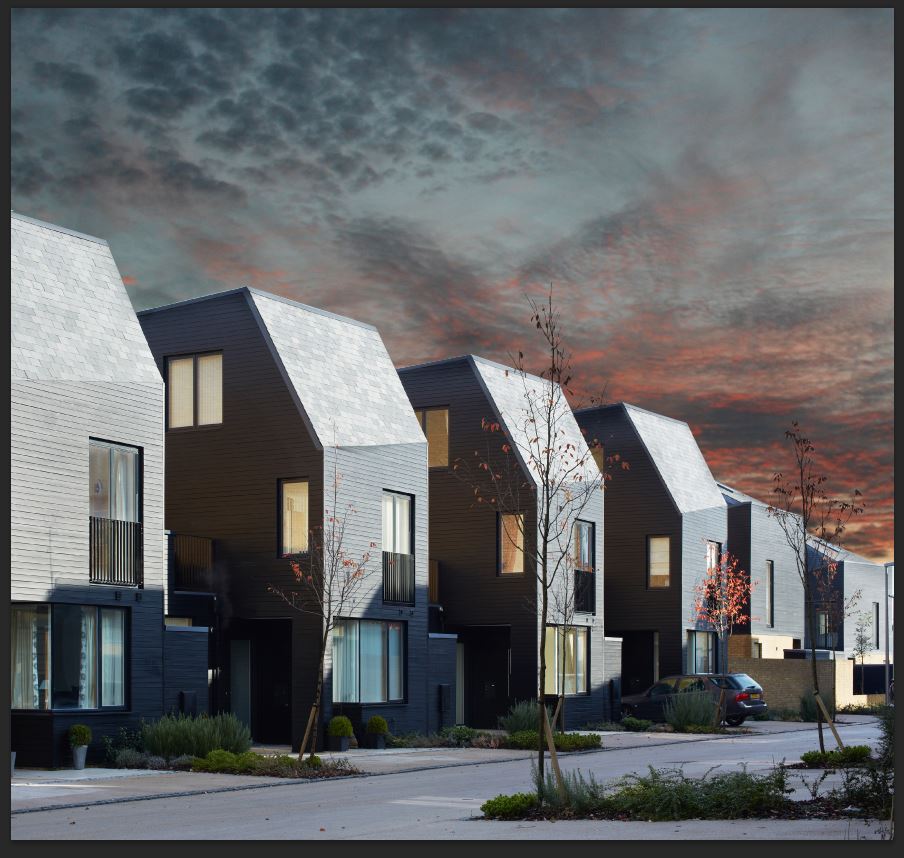 Step 2: Turning the Scene into Night

You already have a night sky; however the buildings in the scene are still bright as if it is day. To darken the scene without changing the original image create a “curves” “adjustment layer” above your building image layer. 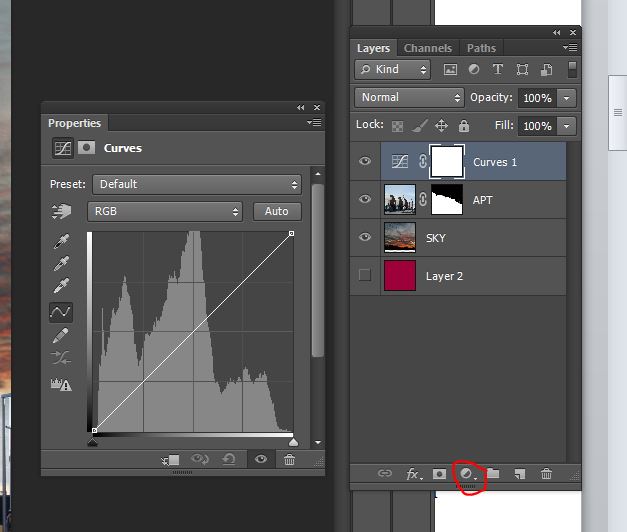 Drag the curve to the right and down to darken the image. You may notice that the sky is also getting darker. Adjustment layers are automatically applied to all layers below them. To apply the adjustment layer “night” only to the layer directly below it click the square box icon with an arrow coming off it. You will notice that an arrow appears on the layer and that it is no longer affecting the sky. 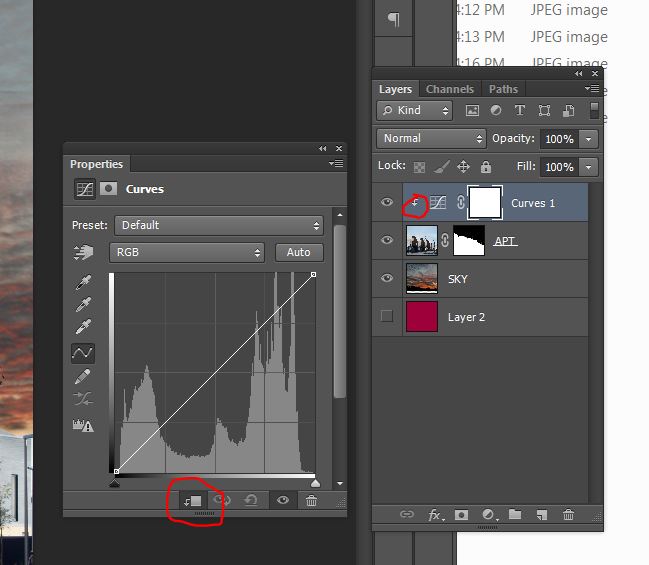 Add Light to a Window

Since it is evening there is a good chance that one or several of the apartment windows will be lit up. To add light to a window start by removing the window from the “night” “adjustment layer”, working on the “adjustment layer” use the “lasso” tool to select the window. If there are elements that cross in front of the window which will not light up click Alt on a PC or Command on a MAC to remove these areas from the selection. With the “paint bucket” paint the selected area black. This removes the darkening effect. 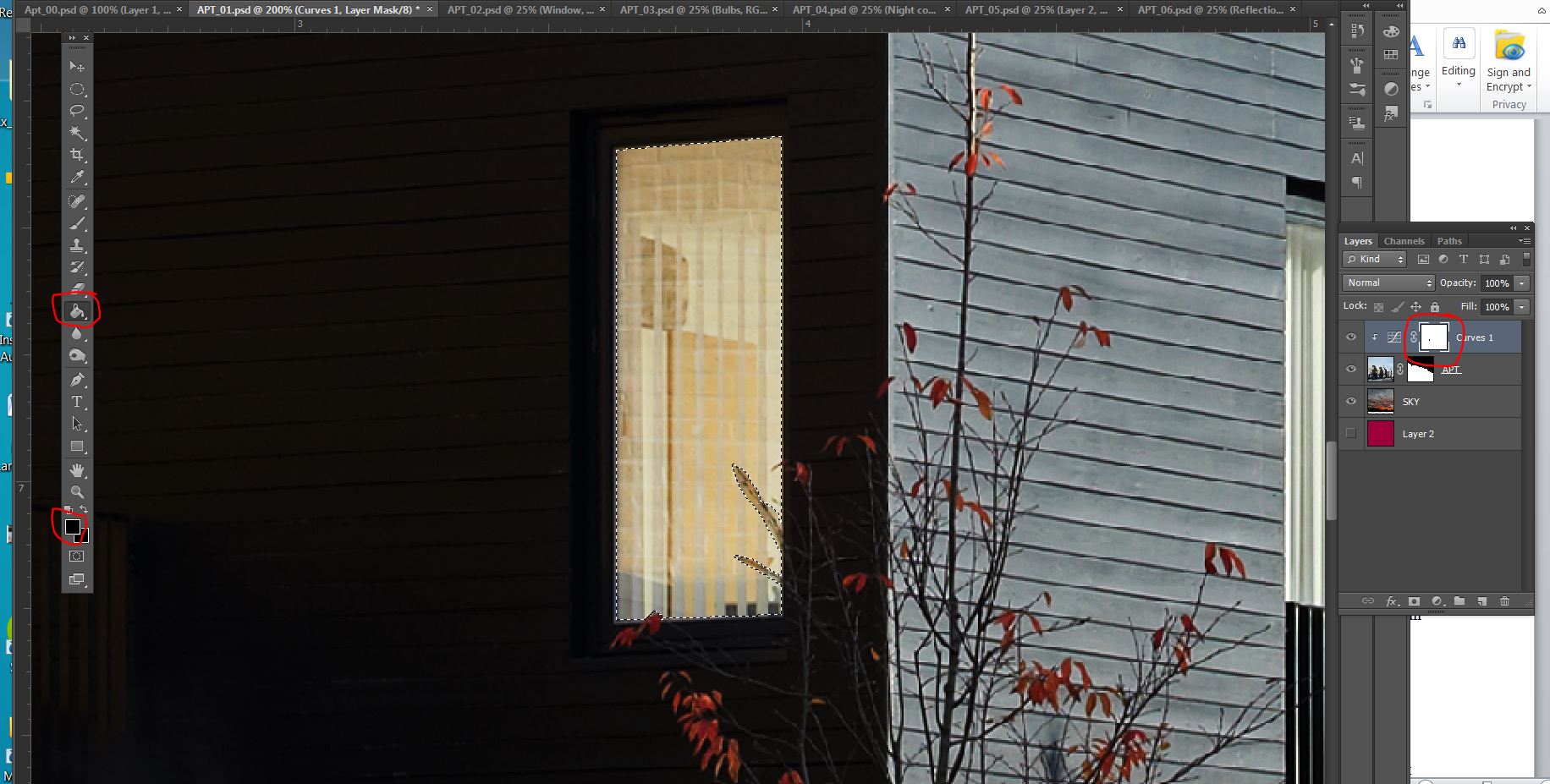 While the window area is still selected add another “curves” “adjustment layer.” Photoshop will automatically recognize that the selected area (the window) will be the only active part of this adjustment layer. In your “window” adjustment layer you can edit the curves to make the shading lighter and give it a yellowish glow. You can also soften the effect by dragging up the “feather” slider. 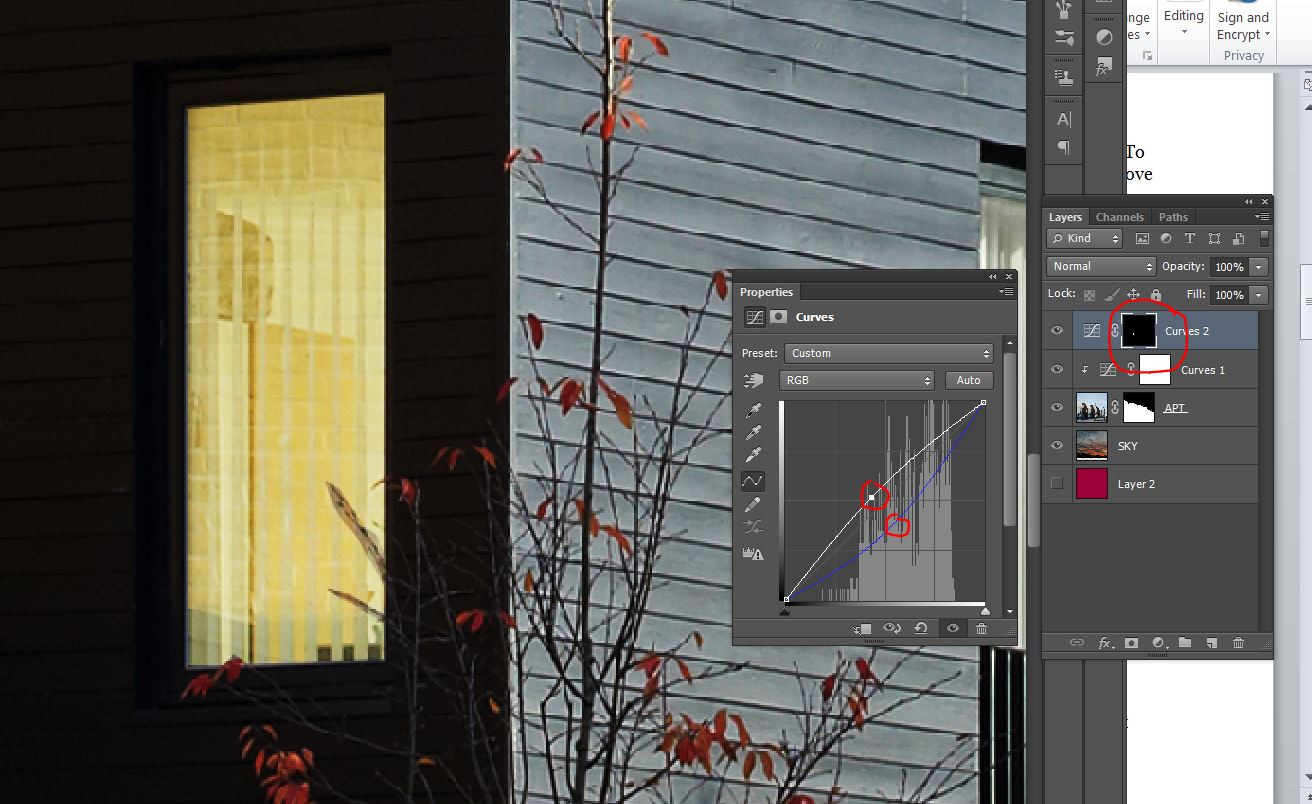 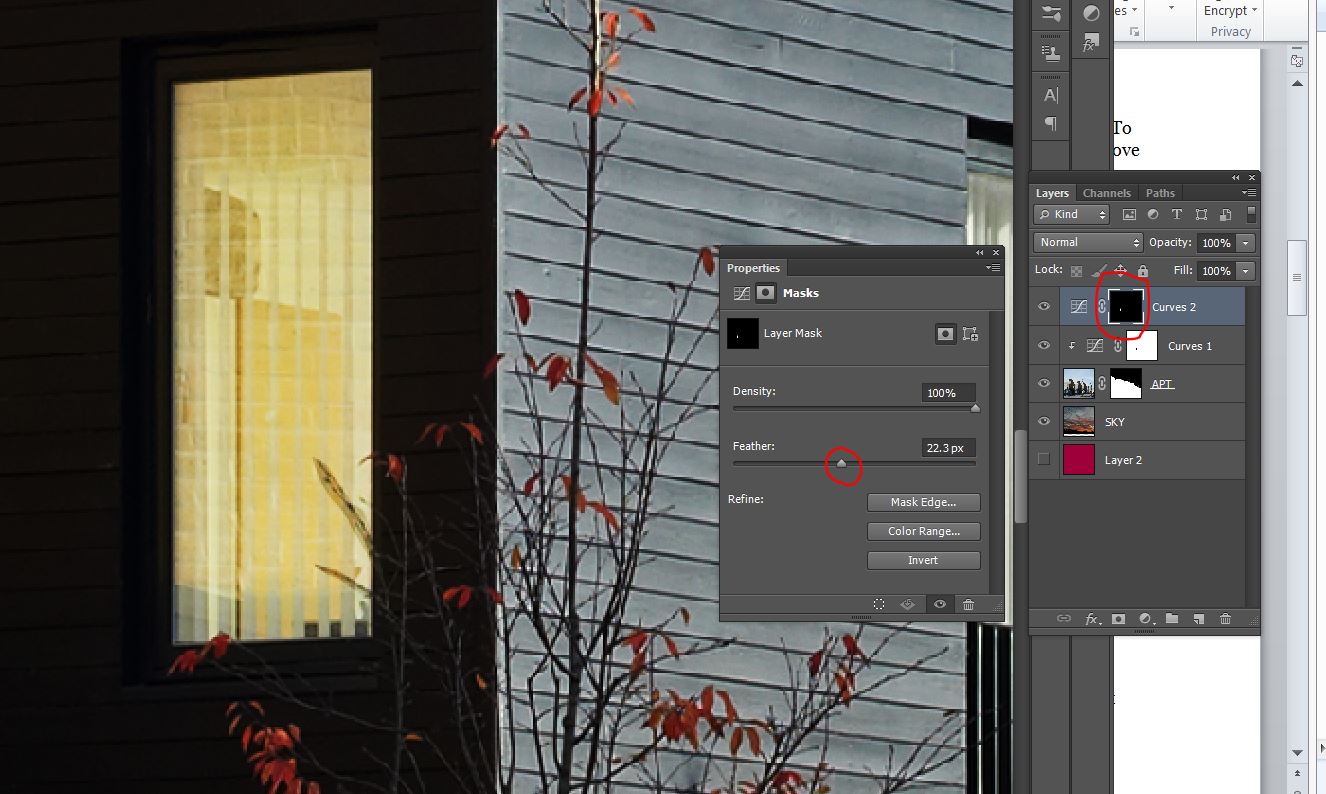 Casting Light from the Window

The inside of your window should look more realistic, however it should also cast a bit of light onto the frame around the outside of the window. To cast a soft yellow light work in your “window” “adjustment layer.” Paint with a soft black brush around the window edge. 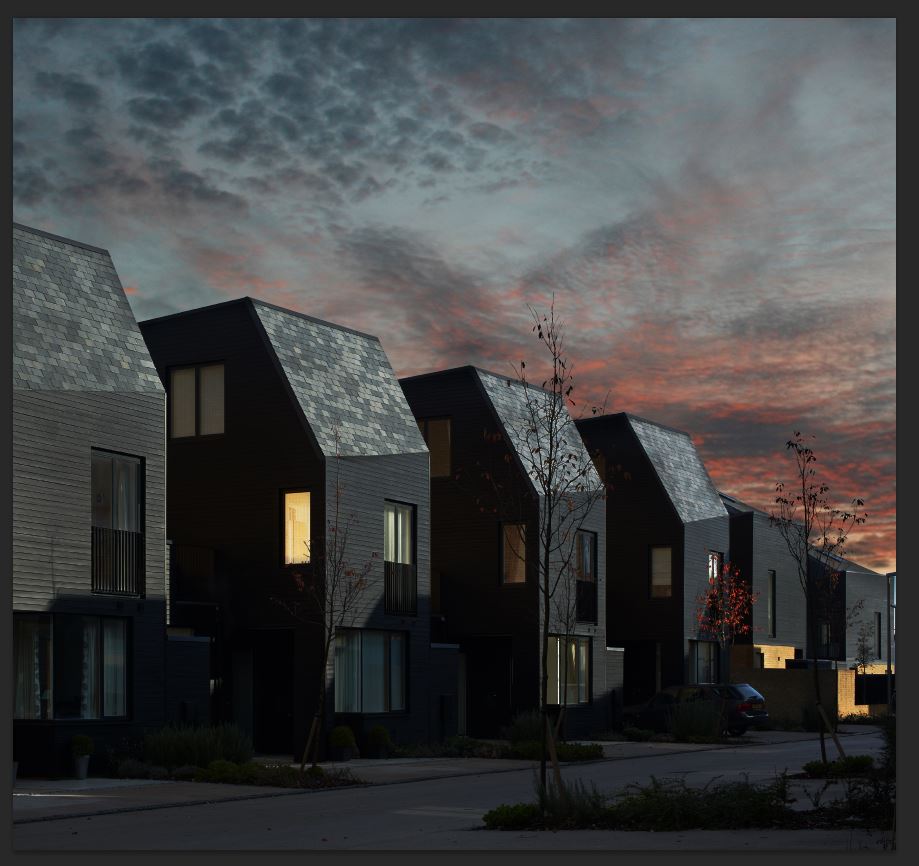 Copy and paste a cut out street lamp into the scene. Each time you paste the lamp a new layer will be created. Using “free transform” scale and move each lamp into the correct position. When scaling the lamps hold down the shift key for an even scale. When moving the lamps into position choose a reference along the building to make sure the scale and placement is correct, in this case a seam on the sidewalk and building window. 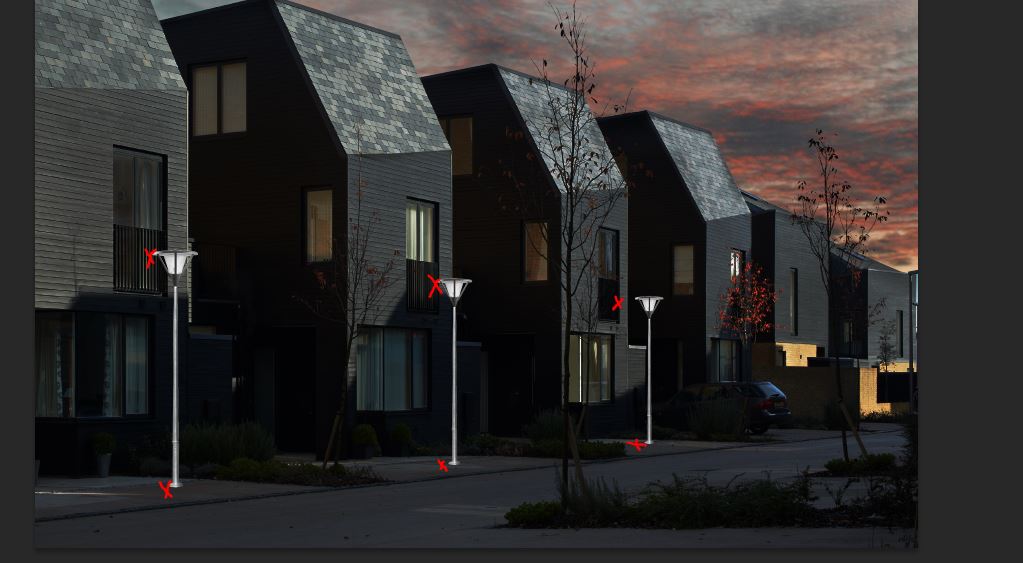 Blending in with the Scene

You will notice that the lights are a bit too bright for our night scene. Copy the “night” adjustment layer used for the building image and paste it above each lamp layer. On a new layer named “bulbs” use an opaque yellow and white paint brush to add light to each lamp. Erase light along the top where the hood of the lamp is. 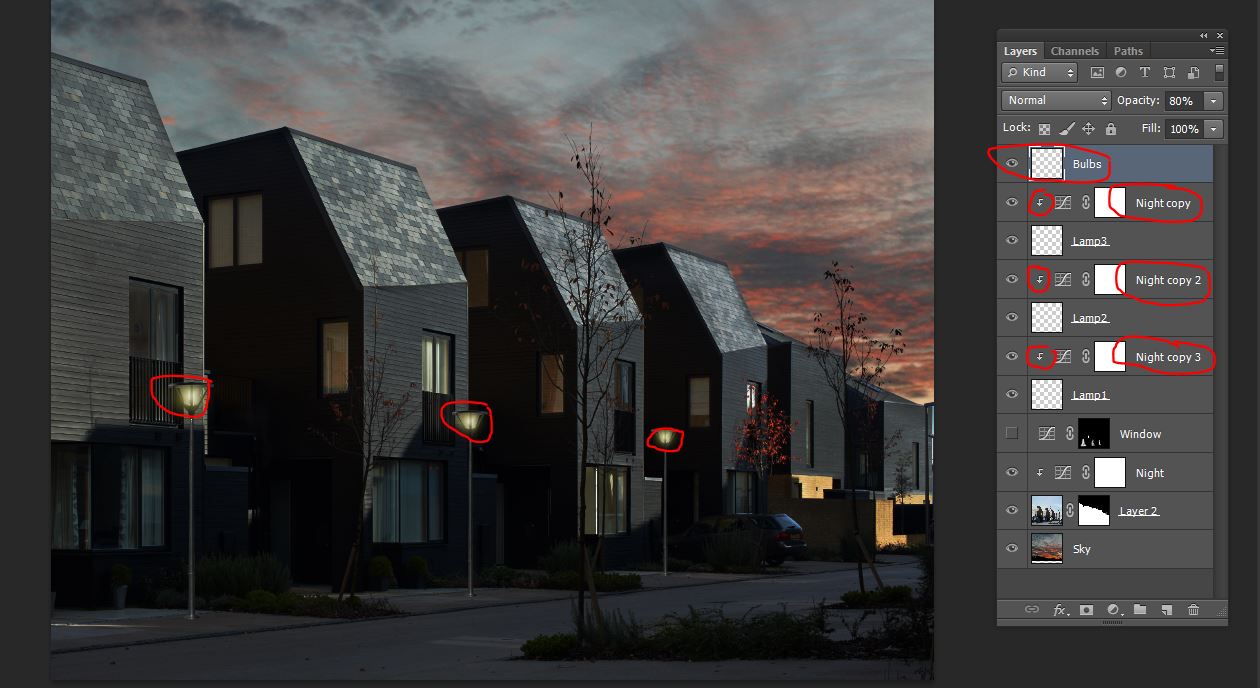 Working in the “window” adjustment layer use a soft and large white paint brush to cast light from the lamp onto the buildings and ground. You are in fact not actually adding light, rather you are removing the effect of the darkening layer. Paint with a bit of black to add shadow to the very base of the lamps. 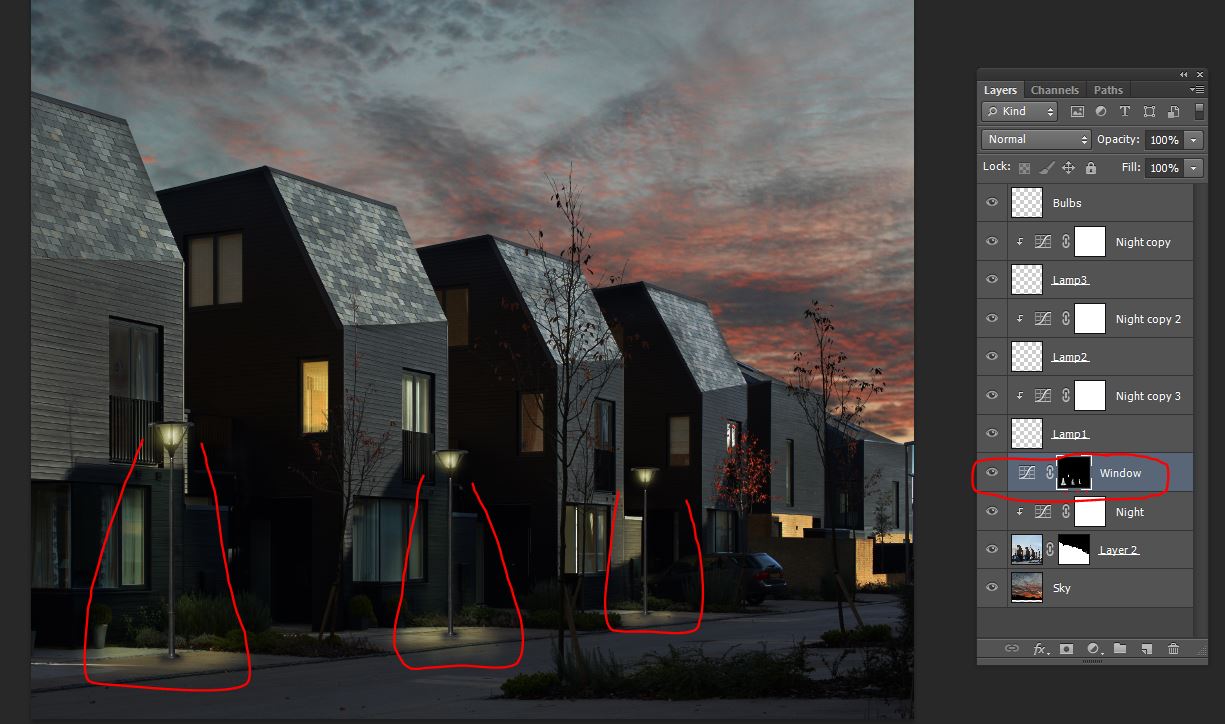 Just like the street lamps scale and position a figure cutout into a desired location in the scene.

Blending in with the Scene

Like you did with the lamps make a copy of the “night adjustment layer” and place it above your “figure” layer. To add a bit of light to the figure coming from the street lamps paint in black with a soft, opaque brush. Remember you must paint directly on the adjustment layer.

First load just the figure as a selection in the scene. You can do this by control + click on the layer icon PC, or command + click on layer icon, MAC. Create a new layer called “shadow”, in this layer fill the figure selection with black. Move the layer below the “figure” layer. Using “free transform” distort the shadow so it lays flat on the ground. By holding “control” on a PC, “command” on a MAC you can work with just one square of the free transform tool.

The shadow around the feet will never line up perfectly and you may need to erase/paint in black around the feet. After you have done this change the layer opacity o 70% in the layer dialogue box. To soften the edges of the shadow go to “filter” -> “blur” -> “Gaussian blur” . 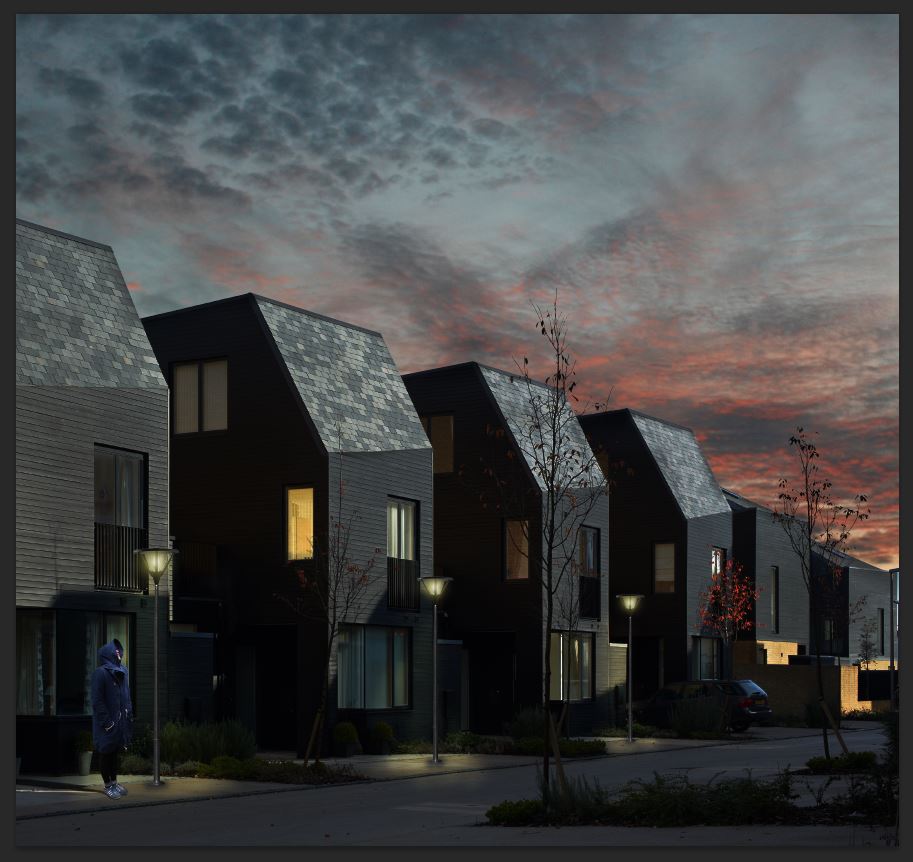 Start by creating a new layer at the very top of all your layers. In the color picker choose a 50% grey; do this by setting C, M, and Y to 0% and K to 50%. Fill the layer in completely with this grey. 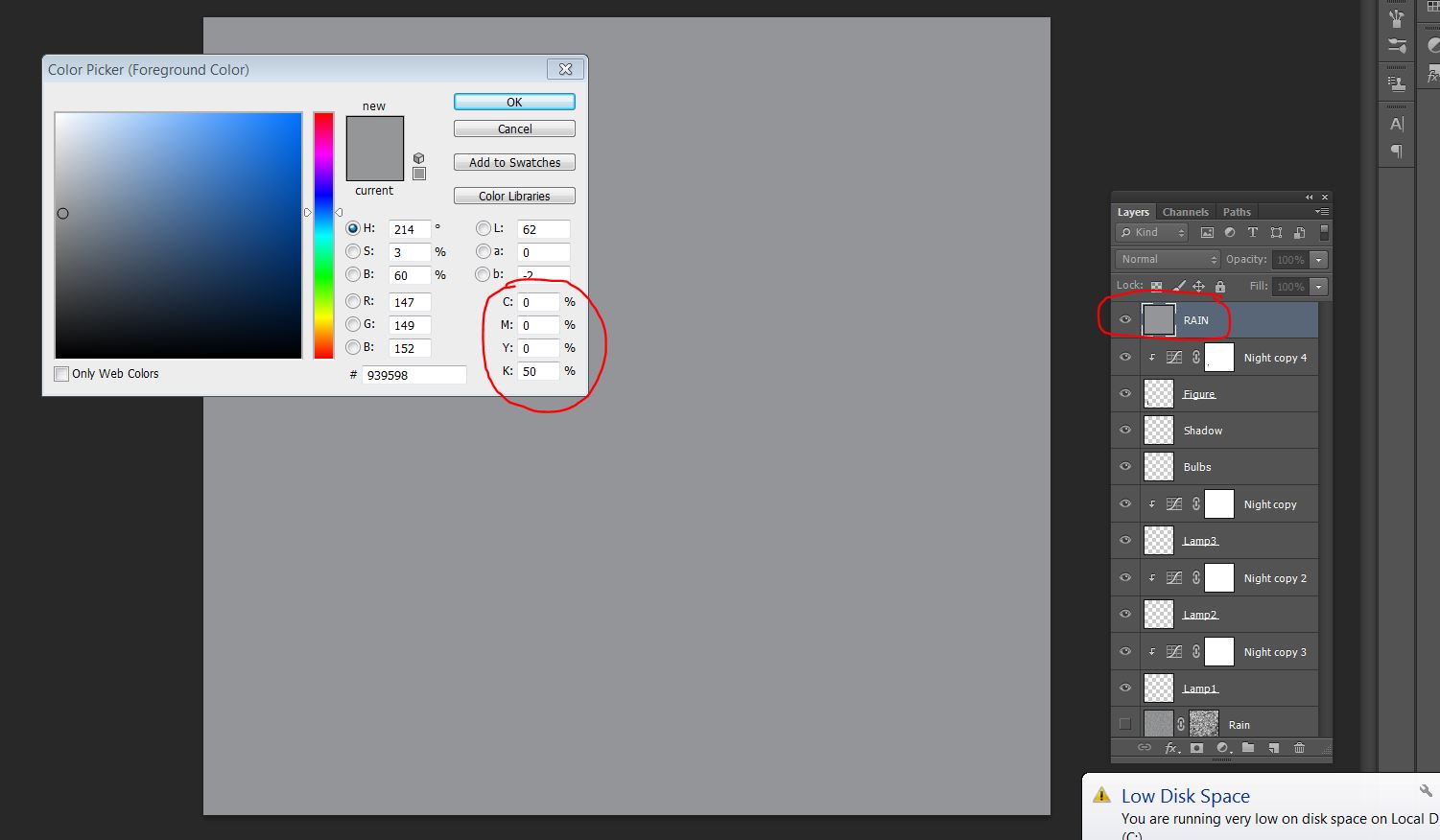 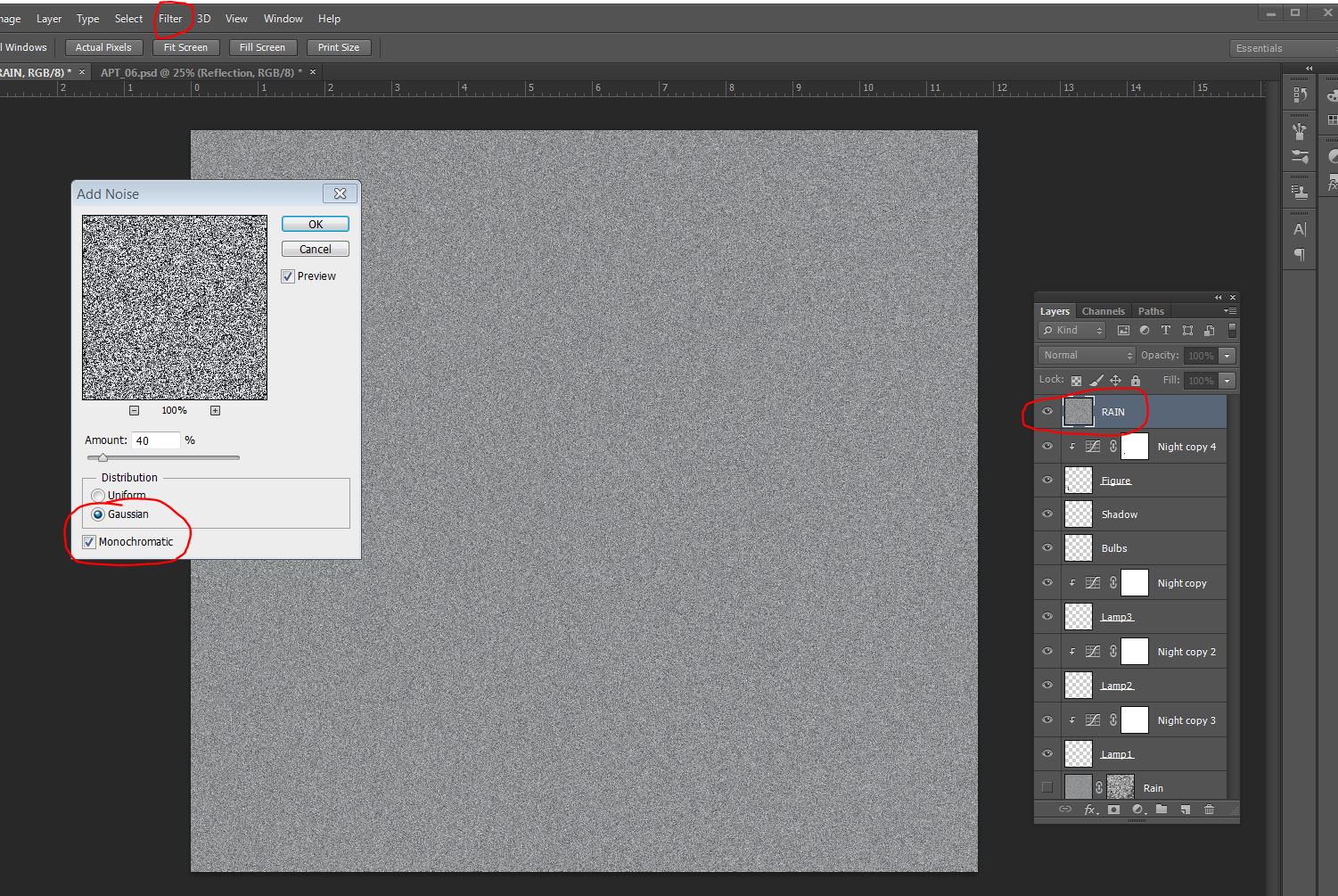 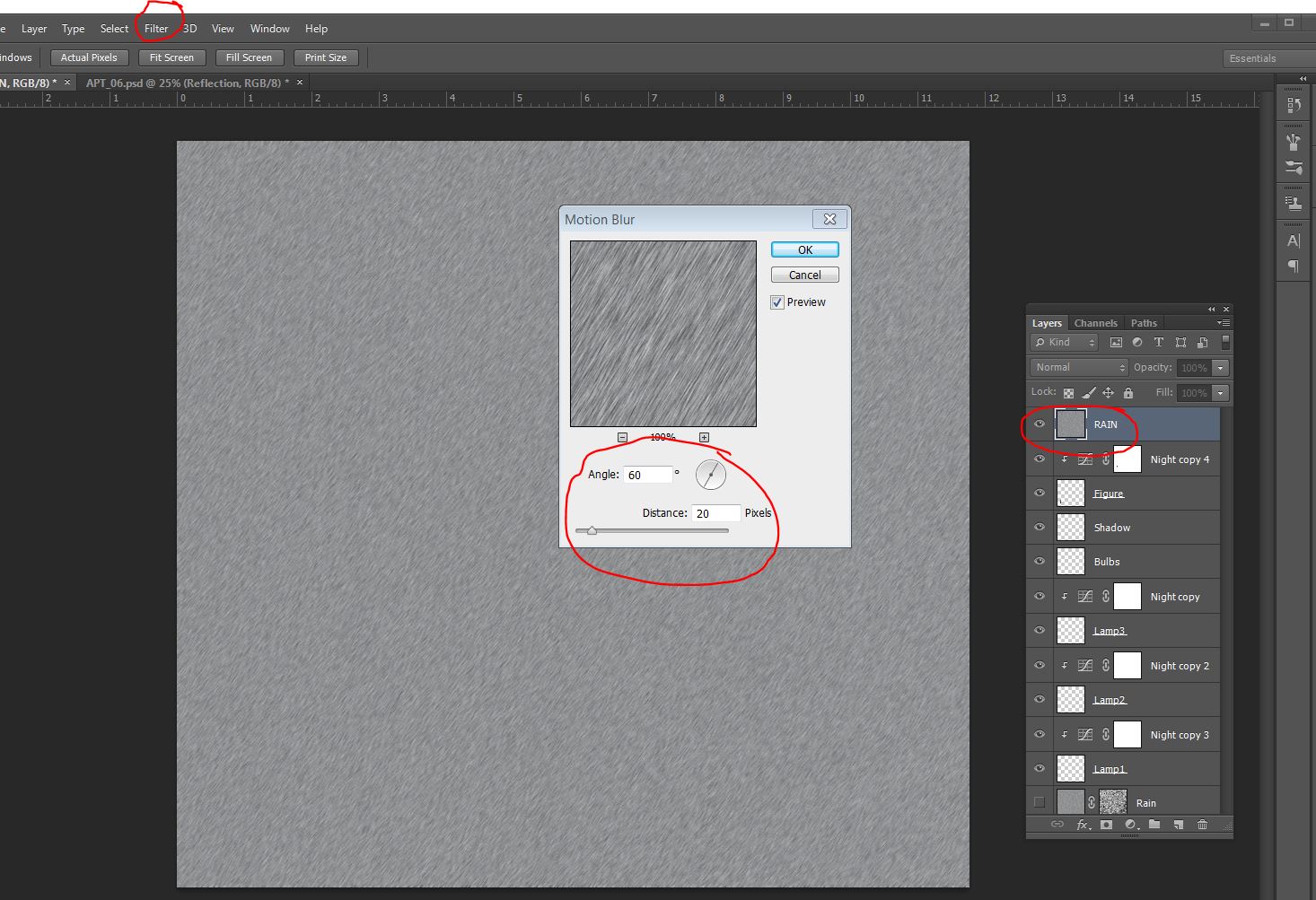 In the layer dialogue box change the layer type to “hard light.” Because we built the layer off an exact 50% grey all the 50% grey that is left will disappear.

To make the rain less uniform (with rain layer selected) go to “layer” -> “layer mask” -> “reveal all”. With the layer mask icon selected go to “filter” -> “render” -> “clouds” , this hides the rain in a random way. You can also paint with a soft, opaque black in the layer mask to remove some of the rain effect in specific areas like the lights and front.

Back in the rain layer go to “image” -> “adjustments” -> “curves” . You can drag the graph to the left to brighten the rain a bit. 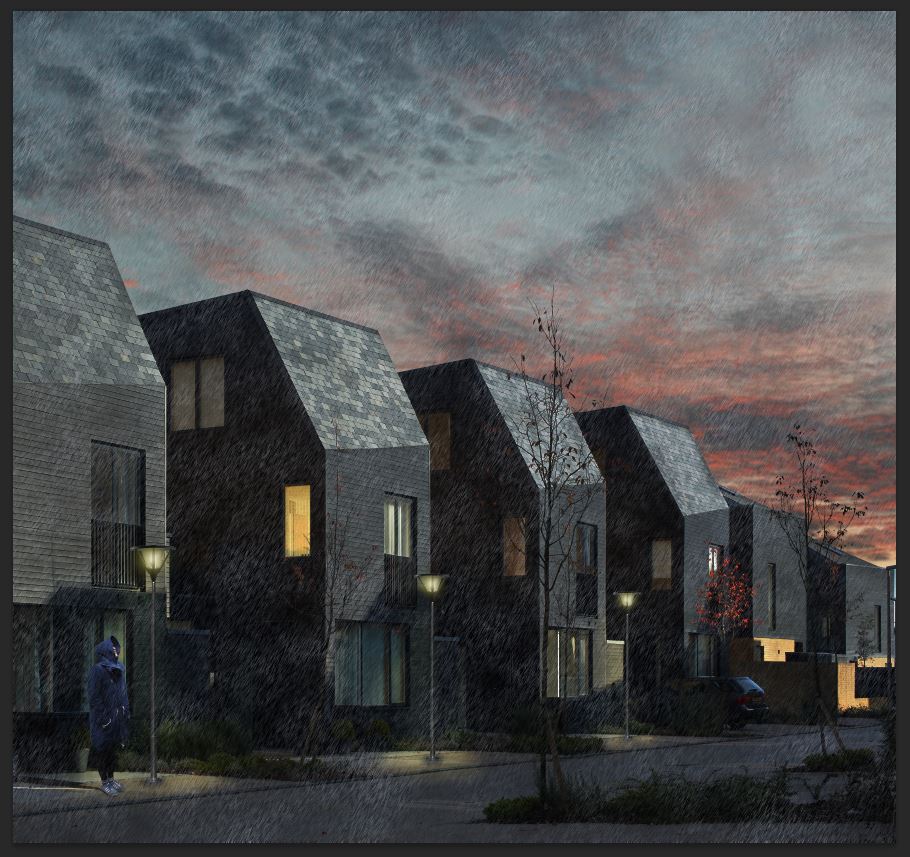 You want to align the edge of the sidewalk in each image. To do this you will need to use free transform. Hold down “control” + “shift” PC, or “command” + “shift” MAC to shear the image so the sidewalk edges line up. Using the lasso tool delete the part of the reflection image that is above the sidewalk line.

Reflections are also never smooth like a sheet of glass. With the reflection icon selected, distort the reflection: “filter” -> “distort” -> “ripple” 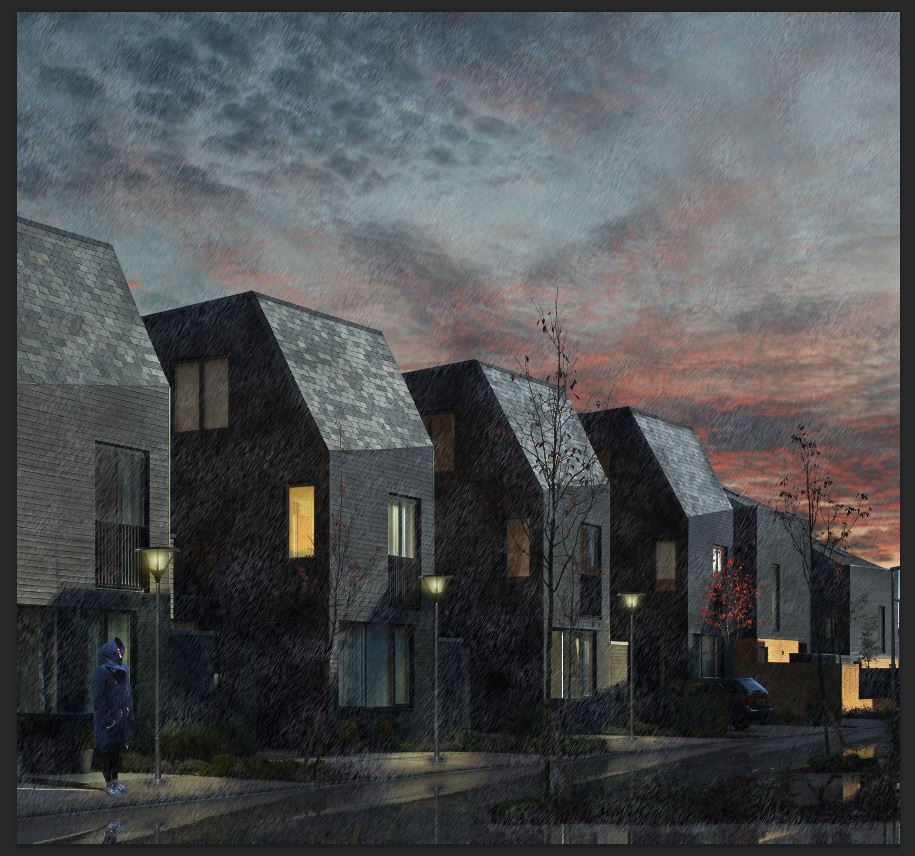