Non-uniform rational basis spline (NURBS) is a mathematical model commonly used in computer graphics for generating and representing curves and surfaces, and is the basis of 3D modeling in Rhino. Rhino can also deal with rational surfaces and meshes. While the math behind NURBS is complex, the important thing to remember is that the geometry in Rhino is defined by control points that you can manipulate.

For an in depth look at NURBS see: Context:Overview of NURBS Geometry or visit TUDelft's site wiki page here .

Rhino works with both text based commands typed directly and point-and-click visual menus. For a comprehensive list of commands access http://docs.mcneel.com/rhino/5/help/en-us/commandlist/command_list.htm

As you use various commands, you will notice that Rhino will guide you through the command, asking for various inputs along the way in the command bar.

We will be teaching and working with Rhino on PC. If you are running Rhino on a Mac there is a good chance you'll run into issues that we cannot take the time to remedy. Additionally, the interface is different on each and it may be difficult to follow along. 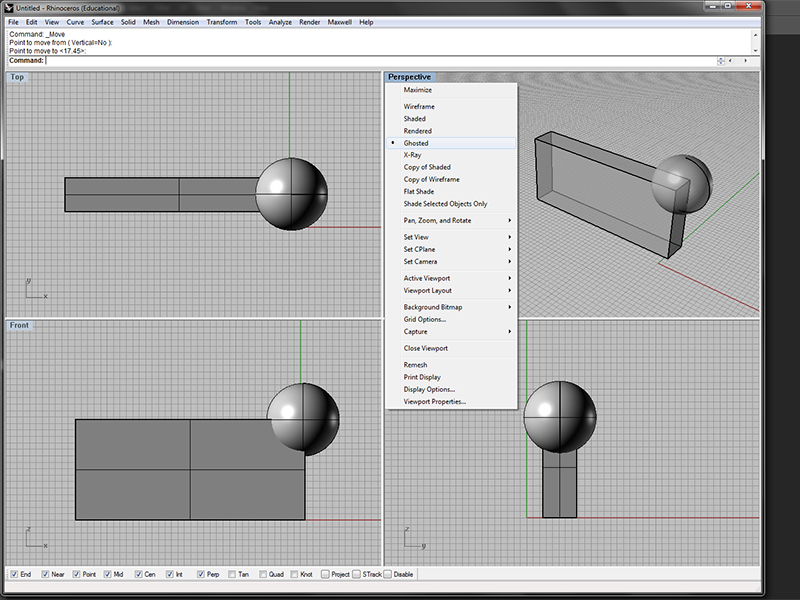 Like most CAD programs, Rhino works with multiple viewports. Double click on the title of the viewport to maximize it (and minimize) or right click to change the way geometry is viewed (wireframe, shaded, etc.). Zoom in and out with the wheel on your mouse, and pan by holding down the right mouse button and moving your curser. For more information access Tool:Part 74655 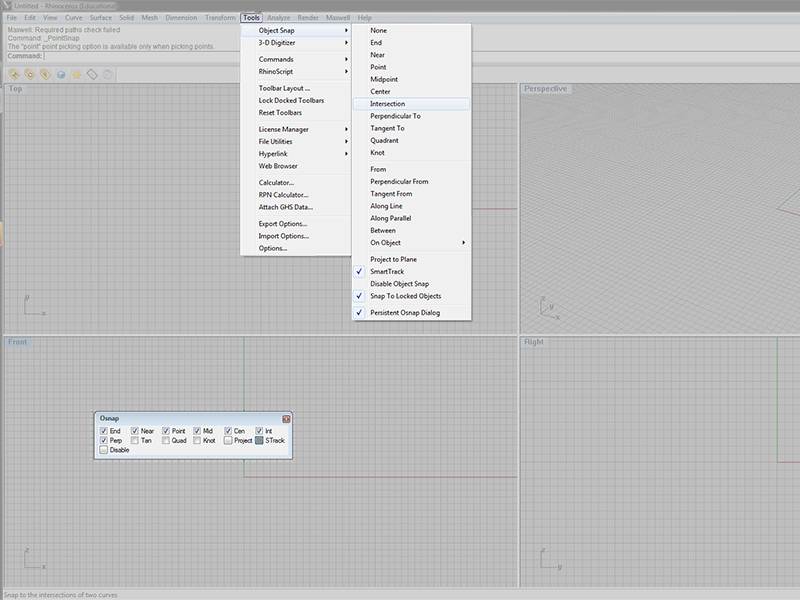 'Object Snaps' refer to your ability to determine what type of geometry your cursor selects (end points, middle points, etc.). They are an important part of modeling accurately, and you should be constantly toggling these on and off. When you open Rhino you should have the "Osnap" menu open. If not you can access it from the "Tools" menu or just type Osnap. 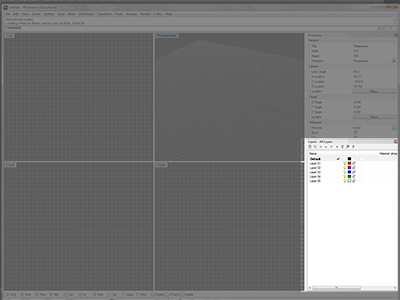 Using layers is critical to keeping models organized and clean - especially when we begin to create 2D linework from complex shapes and export to Illustrator. Access your layer menu by typing Layer.

The properties window gives detailed information for selected geometry - most importantly what layer your geometry is on. Access the properties menu by typing Properties.

(35 min) For our purposes, and in general, it is best to have an idea of what you want to create before you begin modeling in Rhino. Simply experimenting in Rhino will rarely result in compelling results. This means you should spend time with pencil and paper prior to entering Rhino space.

Explore the basic these basic commands under the "Transformation" menu. 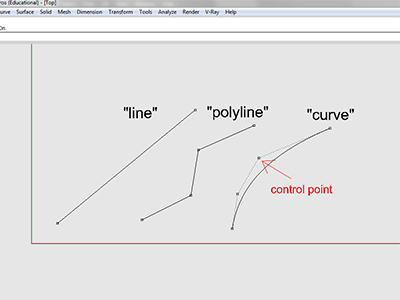 Lines are composed of points, and may be a single "Line", "Polyline", or "Curve". This can be a confusing part of Rhino - for even though the commands differentiate between a "Line" and a "Curve" all linework is considered a curve by Rhino. For instance, the "SelCrv" (select curves) command will select all curves, polylines, single lines, rectangles, circles, etc. in your file.

There are many commands for producing curves. Access these options under the "Curve" menu or curve palette. Some of the most common and useful commands are: line, polyline, rectangle, circle and arc.

"Curve" and "InterpCrv" will create 'free-form' curves, but the results lend themselves to less accurate modeling. 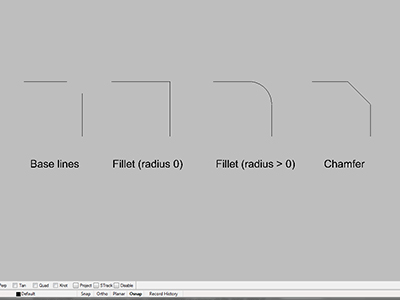 There are many editing commands for 2D linework. Some of the most useful include:

There are various ways of modeling surfaces. You can access these options under the "surface" menu or tool palette.

Plane, Plane (Vertical), PlanarSrf, PlaneThroughPt, CutPlane,
These are used to create a planar surface, and therefore require that foundation linework be planar. The 3-point option can be very useful when using the "plane" command. 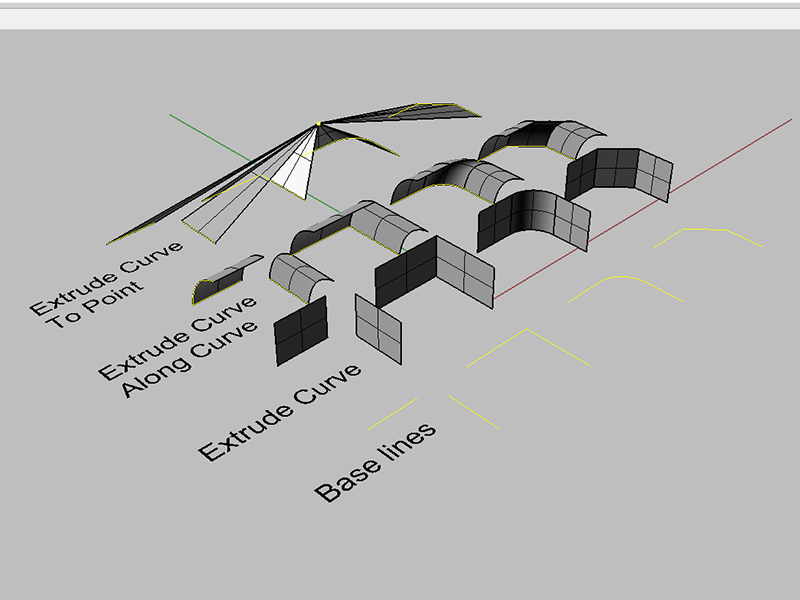 ExtrudeCrv, ExtrudeCrvAlongCrv, ExtrudeCrvTapered, ExtrudeCrvPoint,
When working from existing linework, such as a plan and section, these extruded tools are very easy to use and allow for high degrees of precision. 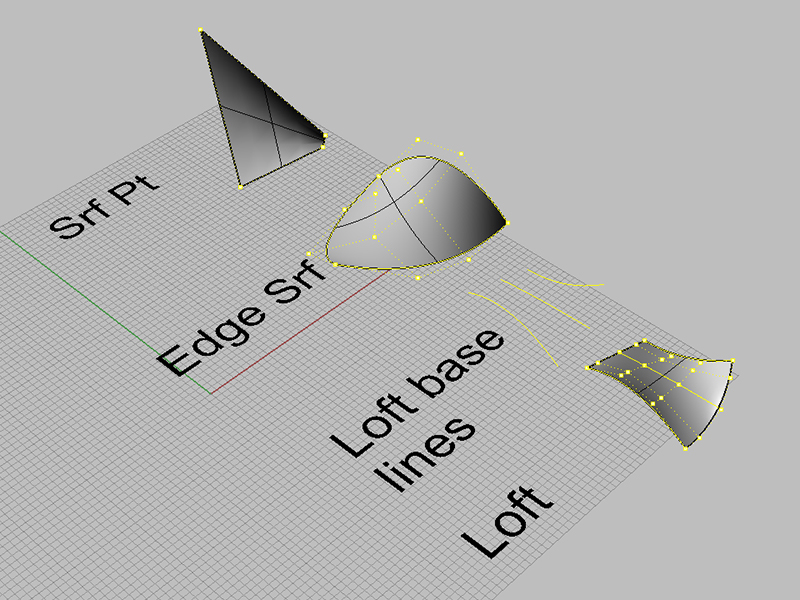 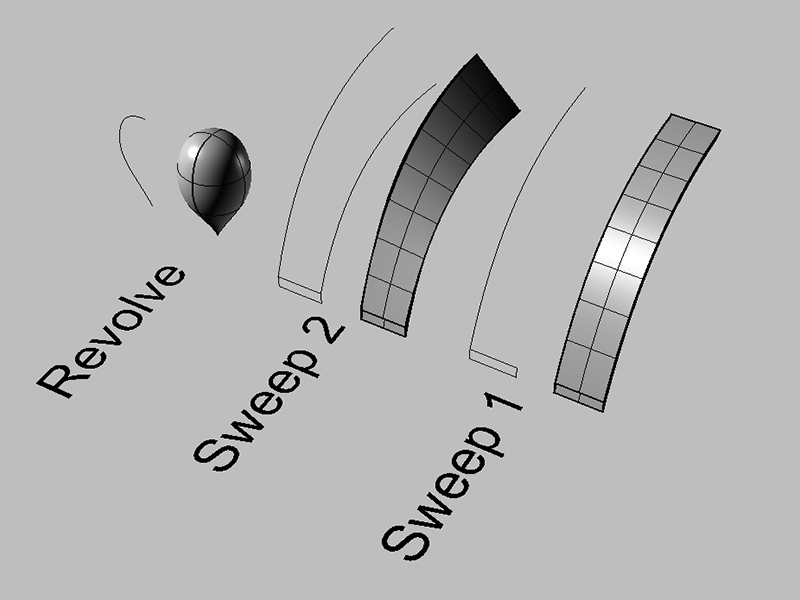 In reality, there are no "solids" in Rhino. What we call solids are closed polysurfaces. This means that if you trim or split a "box" - you will see a hollow volume inside rather than a solid surface.

Rhino can quickly create many geometric "solids" (rational surfaces) by clicking on the "Solid" menu or palette. These include: 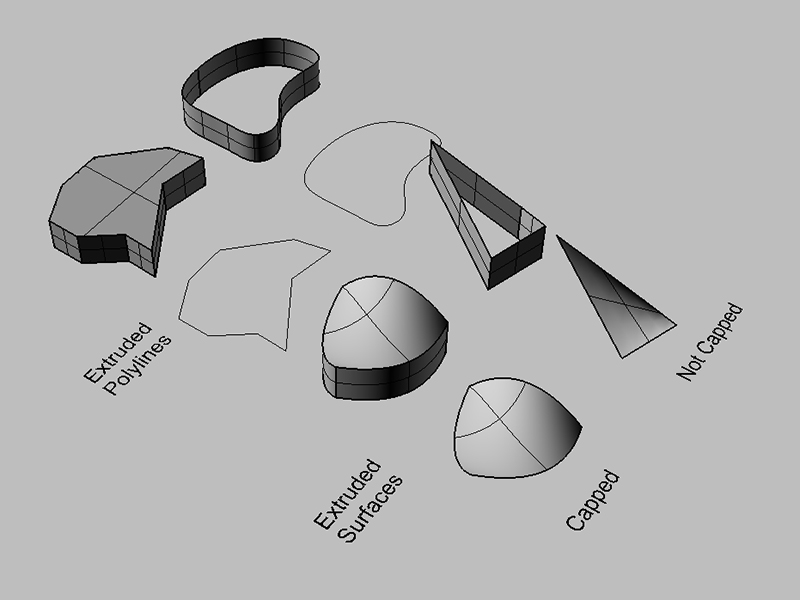 Finally, you can manually create polysurfaces by joining multiple surfaces. When doing so, it is important to get in the habit of making your volumes "watertight." That means - like a closed curve - there are no gaps in your polysurface. This is a good habit to follow in general, but will be very helpful when we generate 2D linework from our 3D geometries. "Watertight" volumes require much less editing in Illustrator. 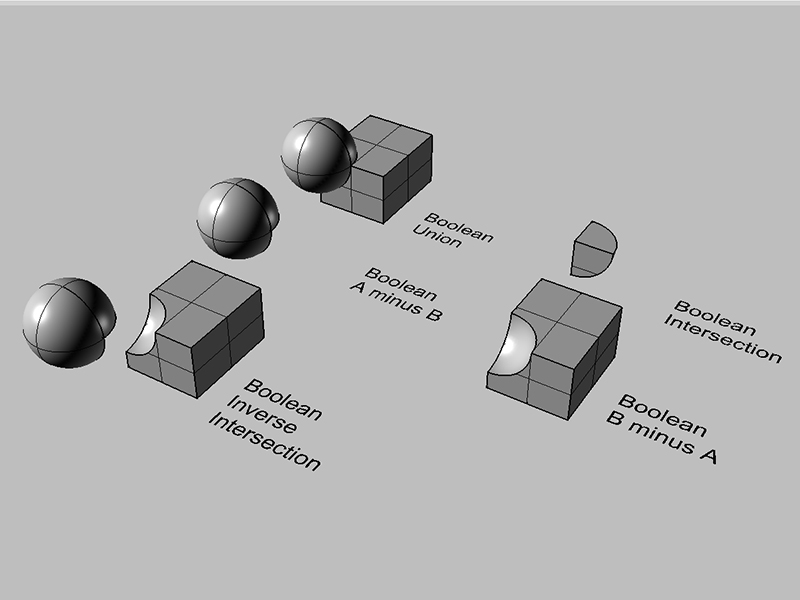 Boolean operations will produce new geometry from two given geometries (sound familiar?). There are four different options, but using the Boolean2Objects command (also found under the solid menu) will allow you to select your geometries and then click through the four options. Hit space bar to select an option. Alternatively, if you know exactly what type of boolean operation you want you can type the command in directly.

Just like lines - we can fillet and chamfer surfaces with the FilletSrf and ChamferSrf commands.