The “contour” command is used anytime you are going to make a laminated physical model from 3d geometry. The curves produced from the “contour” command are just like your original CONTOUR CURVES, albeit spaced in relation to the thickness of the material you will be using. 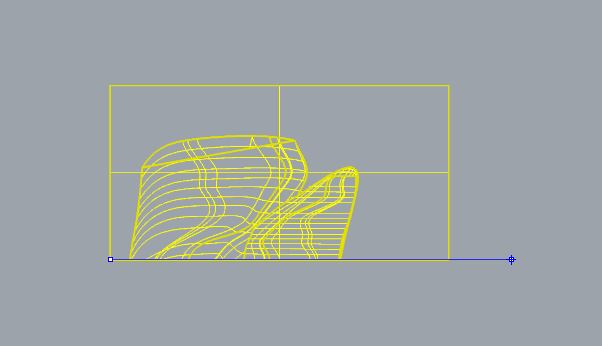 Your new polysurface will be physically produced with a series of laminated sheets of 1/8” cardboard cut on the lazer cutter. The grain of these sheets will run perpendicular to your original CONTOUR CURVES. Work in TOP view. “Ortho” on, “Osnap” on. Select surface to contour -> type “contour” into the command line -> pick a base on the far left side of the object -> drag the line to the right until it passes the object -> left click -> type 1/8” in command line (this is the distance between the curves) ->enter

In order to laser cut your contour curves they must first be separated and placed on a flat plane. However, while the curves are still in their original position you should create registration marks to facilitate more accurate building of your final model. 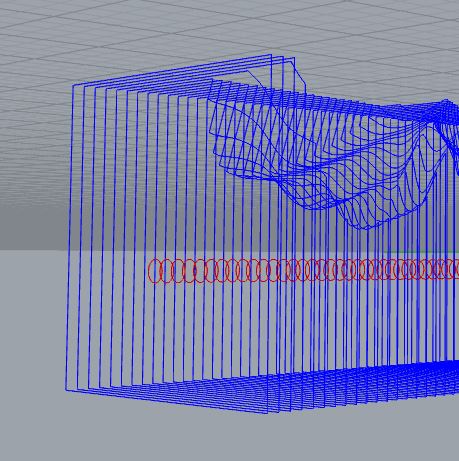 Work in FRONT view. “Ortho” on. Select all of your contour curves and circular registration marks (you won’t see these marks in front view). Rotate all of the curves 90 degrees counter clockwise. Still working in FRONT and starting from the bottom drag each curve away from the form so they are no longer stacked. You will notice that while the curves are not stacked they are also not on the same plane. Go into TOP view select all the curves and registration marks and type the command “ProjectToCPlane”. Check in FRONT view to make sure the curves are in fact on the same plane.

While your contour layers are still lined up in order it is always a good idea to number each layer. This will make building your model much easier later on. Single stroke cad fonts are best for numbering layers because they take less time to “draw” on the laser cutter. Rhino does not have any default single stroke fonts but there are many free fonts on the web.

Each of the three laser cutters has individual templates for cut files. There are templates for Rhino, Illustrator, and AutoCad. You can download the templates from the Cad Cam resource website: http://www.ced.berkeley.edu/facilities/cadcam/resources/

Once you have arranged your pieces on the laser template you will need to change the layers of each “cut”. If you have organized your layers properly it should be quick to select all the CONTOUR CURVES, for example, and move them to the “Outside Cut” layer. Numbers will be moved to “Engrave Light” layer. The laser cutter CAN NOT read any lines that are not on one of its predefined layers. 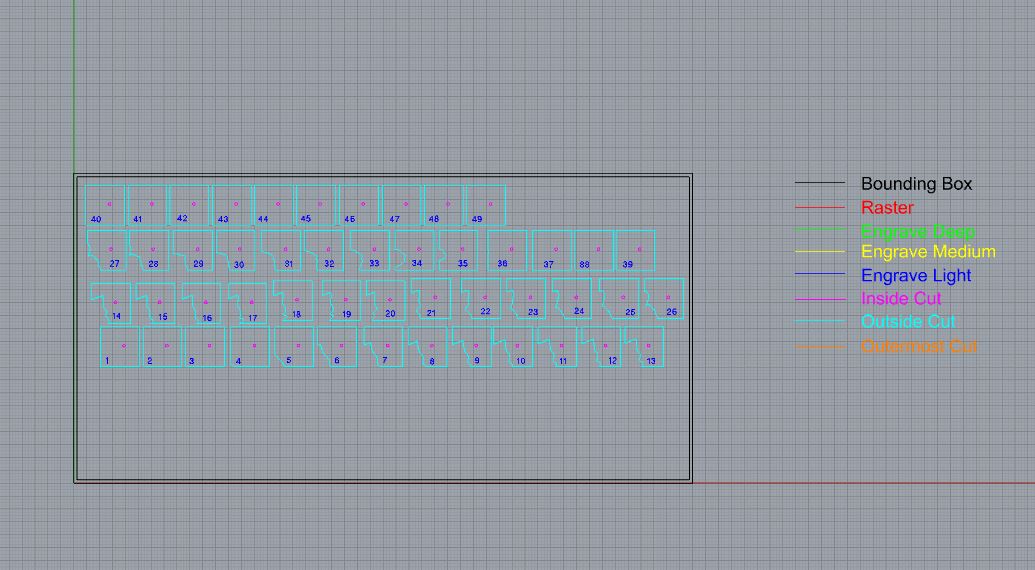