Rhinoceros (often referred to as "Rhino") is a CAD software application, primarily used for geometric modeling in 3D, and is widely-used in architecture, nautical design, and jewelry design. It is a surface-based modeler , and relies heavily upon the use of NURBS (Non-Uniform Rational B-Splines) to describe surface geometry. Models produced in Rhino can be exported in various forms, including renderings, 2D linework, and other 3D model formats. Rhino can also be used for drawings in 2D .

The Rhino interface has several parts that are controlled by mouse clicks or keyboard-entry commands . 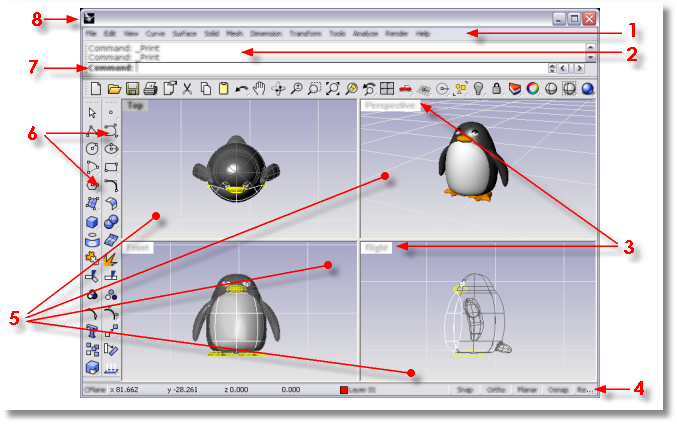 The foundation of geometry in Rhino is NURBS, which has its roots in mathematics. Objects are defined by degree, control points, knots, and an valuation rule. Linear means degree 1, quadratic means degree 2, and so on; changing the degree of an object alters its form. Control points correspond to an object's degree and can be edited to change the shape. Knots determine how smooth a surface is, but cannot be manually moved. The evaluation rule uses a mathematical formula to assign numbers to points.

For more information, see the Overview of NURBS Geometry .