Creating digital site models can be a great tool for both creating site drawings such as plans and sections, diagrams, rendering context, as well as producing physical site models.

Sometimes you can download site information as mesh models, like the image below, however mesh models could be transferred to NURBS in order to provide linework. The steps below will outline how to create NURBS geometry from existing GIS information of the site and surrounding context and gather group data to produce a complete site model.

Rhino files associated with various steps are available to download. Simply click on the link to download the file and practice the specific step outlined below it. 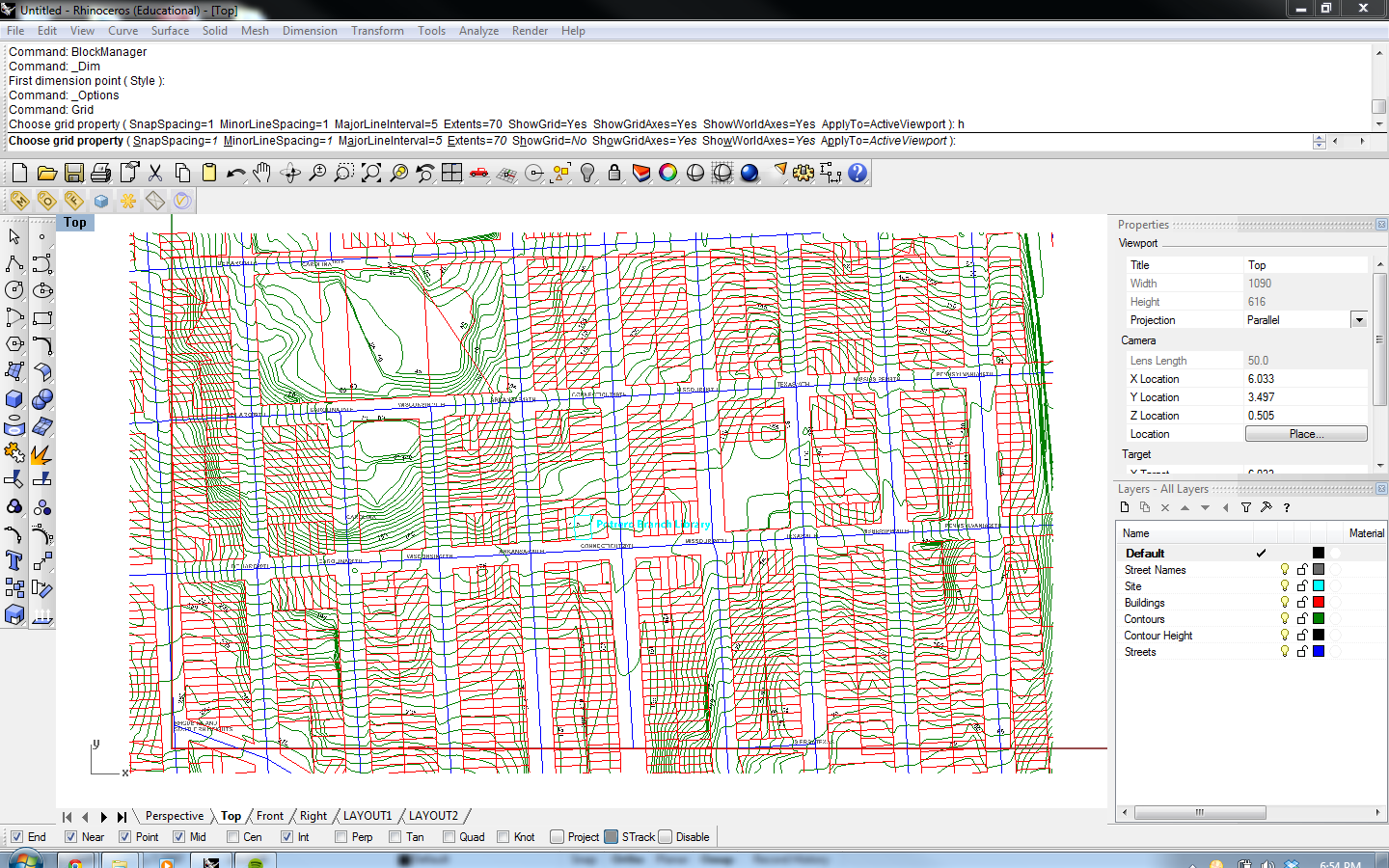 Depending on where you received your information, it's important to organize it as much as possible prior to scaling and modeling. Whether the file is coming directly from GIS or Autocad, make sure that there are layers describing the following items which we will be modeling in this workflow:

You may need to Explode data or Ungroup them in order to make them full accessible.

Before moving on - be sure to check the scale of your data! When transfering between programs, it is easy for data to be scaled improperly. Go to Options to make sure you are in Feet . 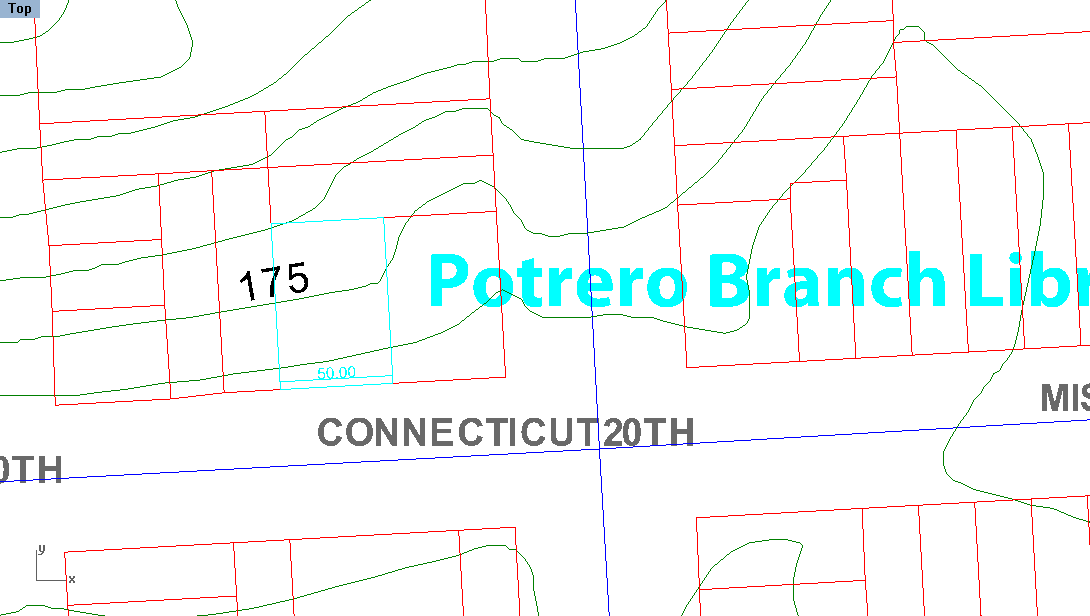 First, find a location where you know an established distance - like the width of a street or building lot. Use the Distance command to check what this distance is in the digital drawing. If the distance is off, select ALL of the linework (make sure all layers are unlocked) and Scale the drawing according to that distance. 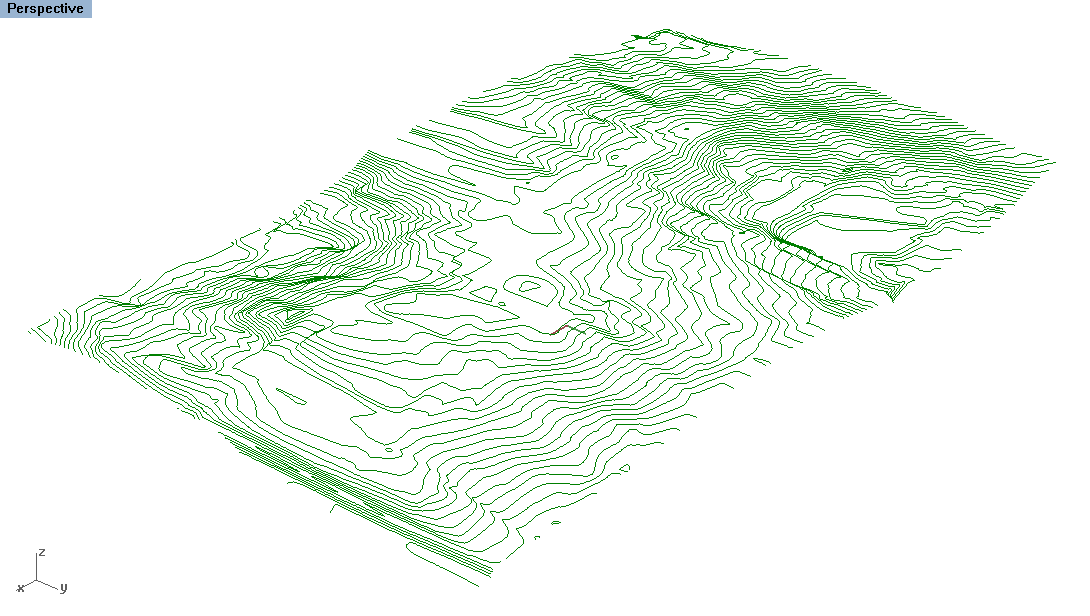 Raise the contour lines and use the Patch command to drape a surface over the contours. For more information on this process, follow this workflow that covers the details of creating a topological surface. 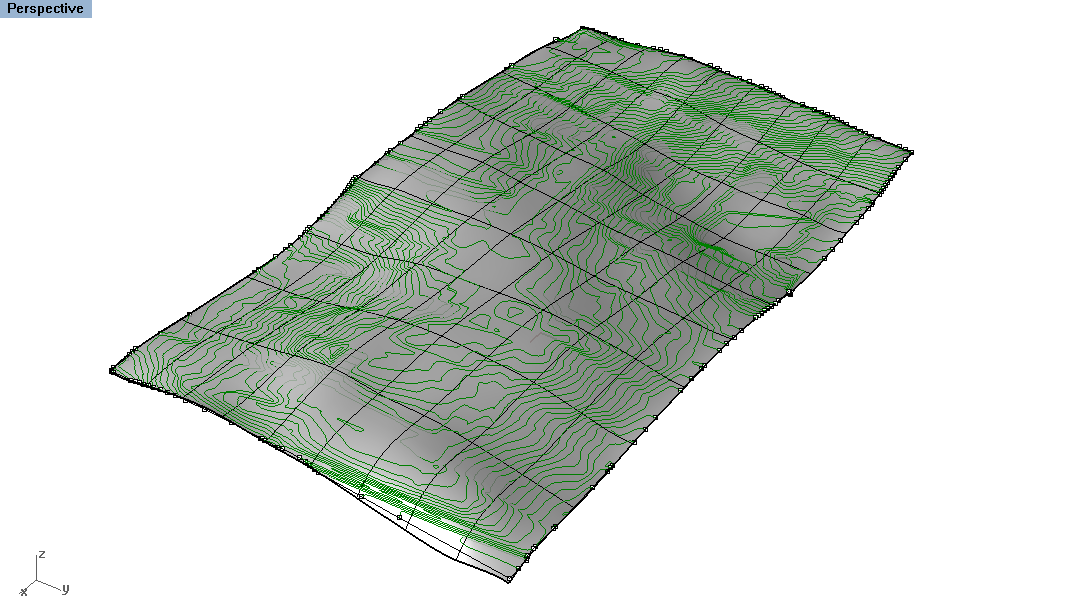 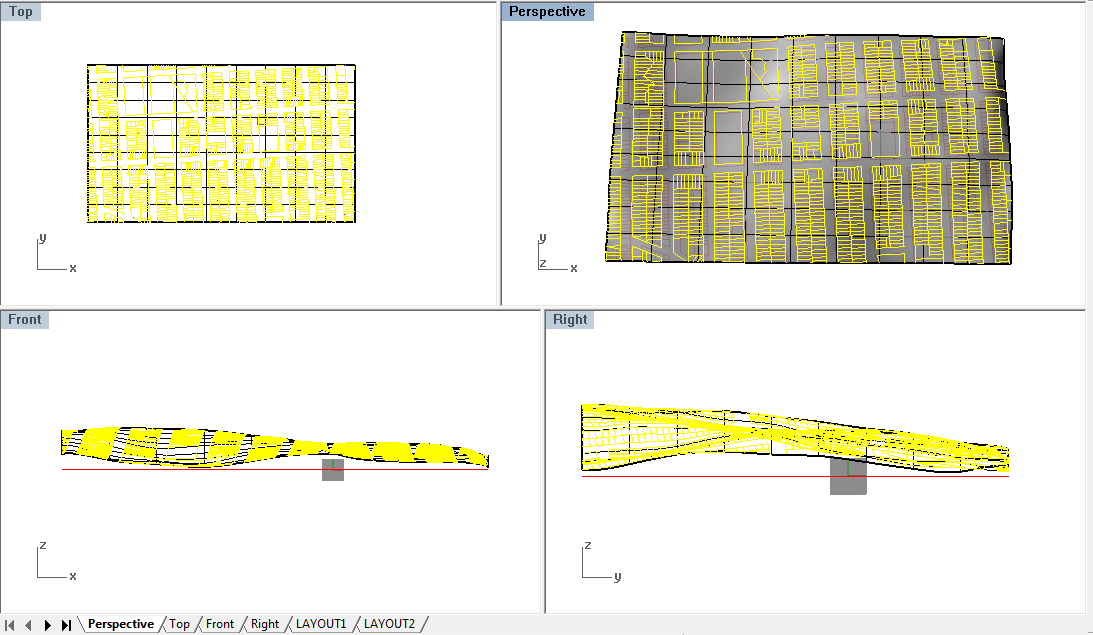 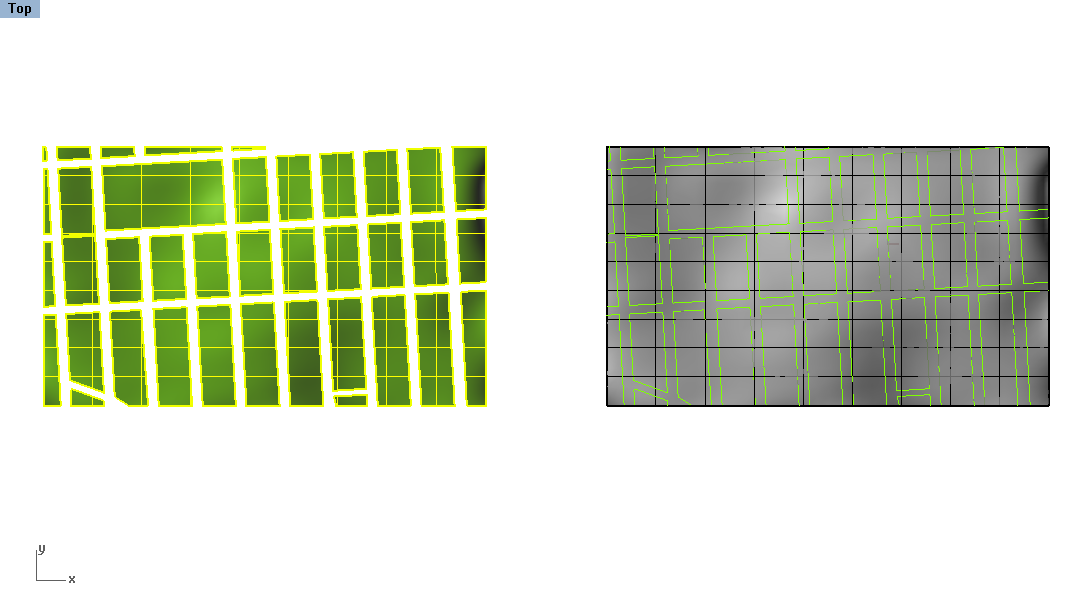 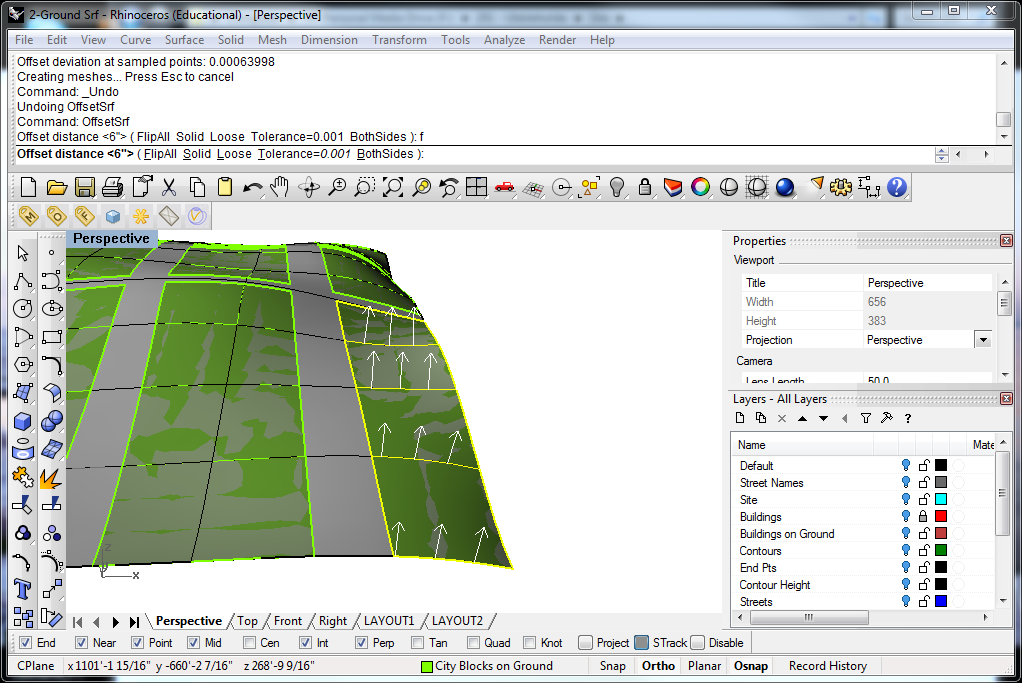 Once you have the blocks trimmed, move them back to the original ground surface location. To give the blocks a height differentiation, OffsetSrf each block surface by 1/2 foot. Be sure to keep the options set as solid' so that it remains as one solid polysurface. 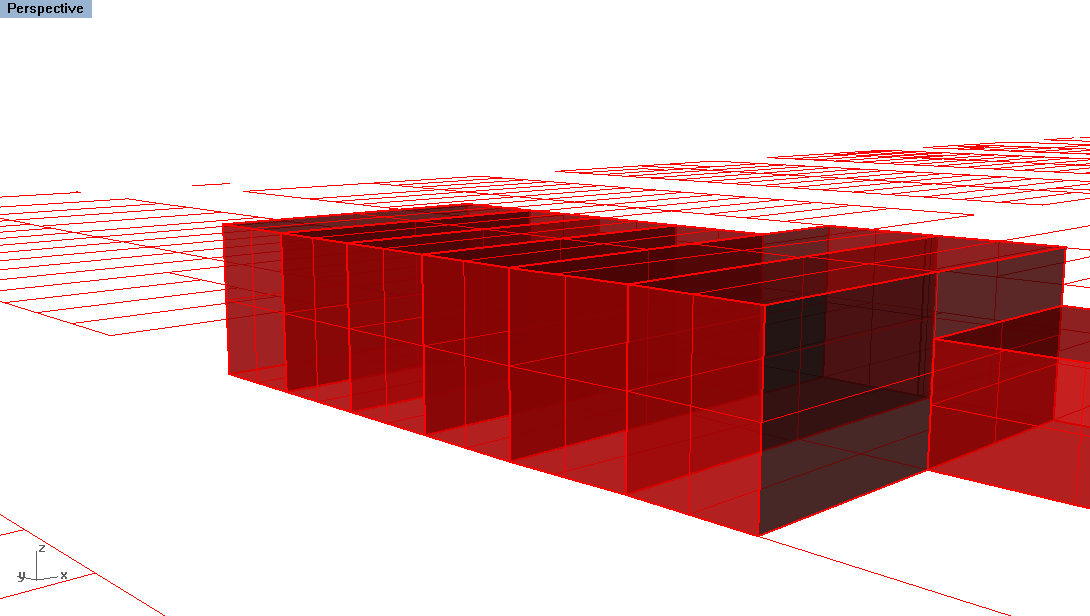 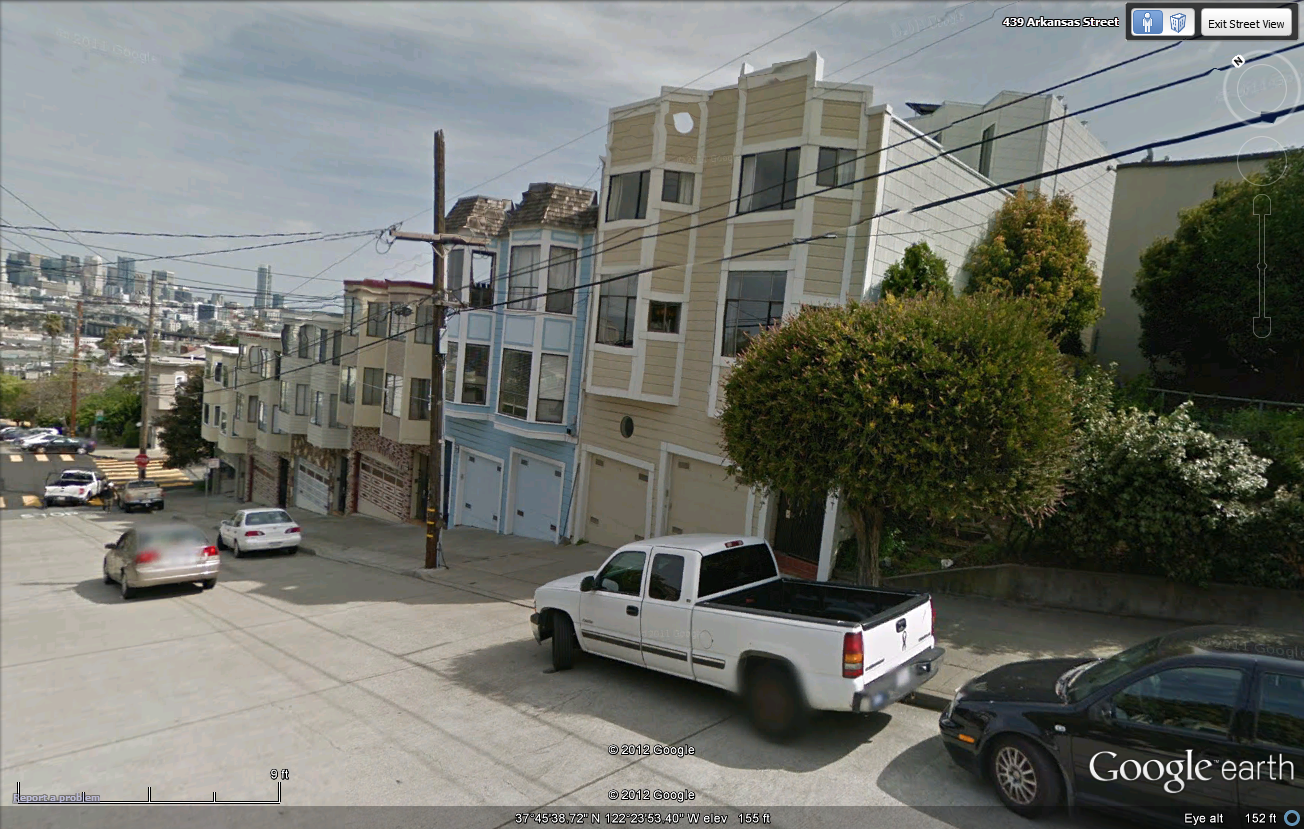 The next step is the most tedious as it involves gather more information that what we have in the drawing: building heights. Focusing on one block at a time, find the same location in Google Maps. Enter to street view to look at the building's elevation.

Return to the original building outlines (located on the c-plane, not the ones projected) and Extrude the

Once the buildings are extruded, you then need to move them up to the right location on the ground surface. Especially on a very hilly site such as Potrero hill, this is where you will start to notice the building heights sloping just like the site itself (despite the fact that we generalized all stories to be 12 feet). 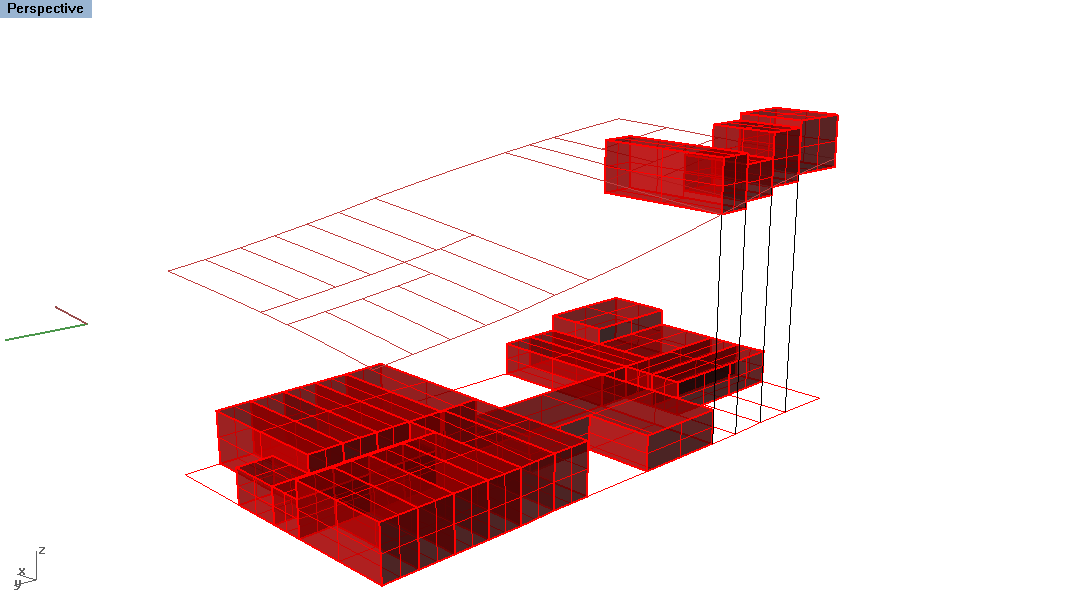 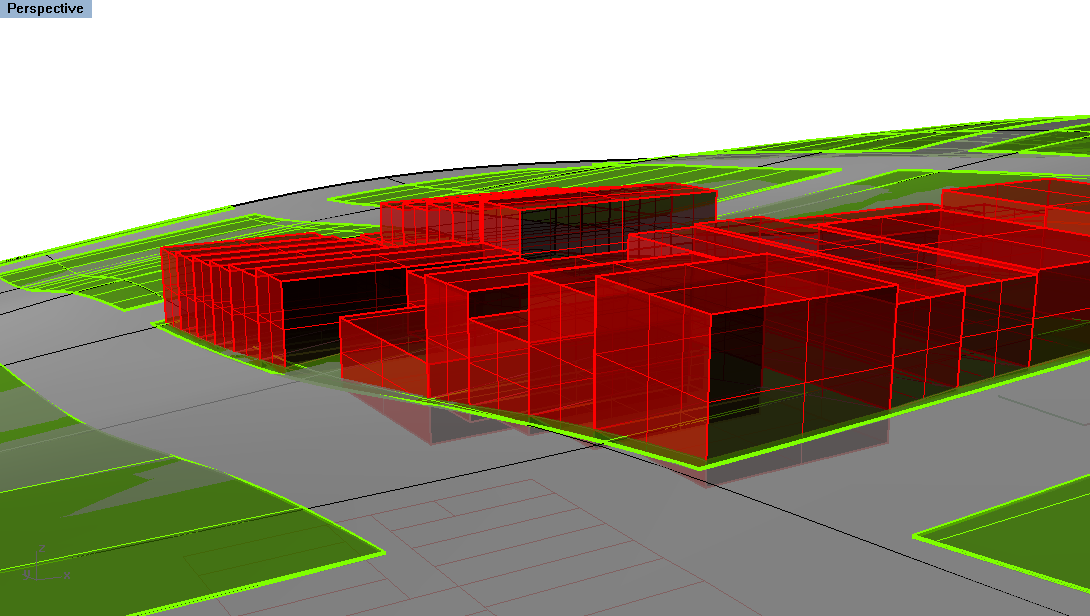 It is important to keep the OSnaps on the right setting when moving the buildings up. For each building, Move the building from the corner where you measured the story height. This should be along the road you were viewing the building elevation in Google Maps. Select the building and Move it by selecting the front corner and moving it vertically to the same corner that was projected on the ground surface.

Combining Data with others

To make a large site model in a much faster manner, you can easily divide the city blocks with other collegues to divide and conquer the modeling tasks. To do this, use the ExportSelected command to export different city blocks. Or share the same original file with all the ground surfaces created (all the steps previous to Extruding the building).

When we join our rhino files together, they don't match up at all. What did I wrong?
You did not divvy up the model well.

Basic Rhino Commands including Patch
This YouTube reviews the same tools as the workflow above but in one long video format. From Nick Senske's UNC course on digital representation.