In most plans (with the notable exceptions of roof plans , site plans , and figure-ground plans ) a cut plane is positioned at a specified distance above an occupiable floor, typically at 4'. This cut plane determines how objects in the plan are represented: objects below this level are visible in the plan, objects at this level are shown as 'cut', and objects above this level are omitted or shown as dashed lines.

This is a drawing that you'll be using most of this term. A floor plan is a horizontal cut through a building, typically about 4 ft (1.2 m) above floor level. At this height, doors and windows are represented as being cut through. Typical scale: 1/8"=1' to 3/8"=1' However, if your drawing includes important features above the level of 4 ft (1.2 m), you should decide which level of cut describes your drawing in a better way.

This is a horizontal cut above the building as a whole, looking onto the roof of the entire building. Shadows are often added to demonstrate the mass of the building in reference to the surrounding site. Typical scale: 1/16"=1' or smaller.

This drawing is a horizontal cut through a building but instead of looking down, the view is looking up. This is typically used to indicated ceiling grids, lighting or material patterns. You will probably not be using this type of drawing much in school.

This drawing is a horizontal cut through all the buildings and surrounding context. It can include the first floor plan or roof plan, depending on how you would like to emphasize the building on the site. Typical scale: 1"=50' or much smaller

Often called a Nolli Plan (after Giambattista Nolli's maps of Rome), these drawings are horizontal cuts through an entire neighborhood or city. Buildings are represented as black poche and non-building spaces are left white. This is a popular abstraction for understanding building or city patterns.

A historical extension of this idea was utilized by Giambattista Nolli in his famous map of Rome in 1748. His map utilizes the same mass to void relationship utilized in the figure ground diagram; however, Nolli added an additional layer of information which included public spaces. Thus, when one views the Nolli map, not only is the void of street elements apparent against the mass of buildings, but the voids of public spaces such as churches are visible as well.

Campus Plan Comparison
A site by Ayers Saint Gross that pairs figure-ground plans of a large number of college campuses for comparison.

Figure-Ground Game
A game developed by sporcle.com that challenges the user to identify American cities by figure-ground drawings alone.

Conventions of Line Weight and Type

Lineweight, or the visual lightness or darkness and width of a line, are conventionally employed in plan drawings as follows: Line weight

Some notes by PATRICK WEBER on the Bartlett Year 1 Architecture Blog on Enric Miralles' Drawing for the Calle Mercaders Apartment:

The drawing lacks heirarchy. Miralles has no interest in establishing a clear heirarchical reading of the drawing. There is no variation in line weight (although occasionally, he doubles lines closely enough to approximate a thicker stroke). Mobile objects: tables, doors, etc. are not accorded any status distinct from stationary objects. The swings of doors and cupboards are not given a lighter line. Even the heirarchy of drawings is flattened: this drawing was not one of a set, and in it elevations are projected into the same plane, even the same paper space as the plan. Indoor-outdoor are not accorded any heirarchy: the drawing spills into outdoor spaces. 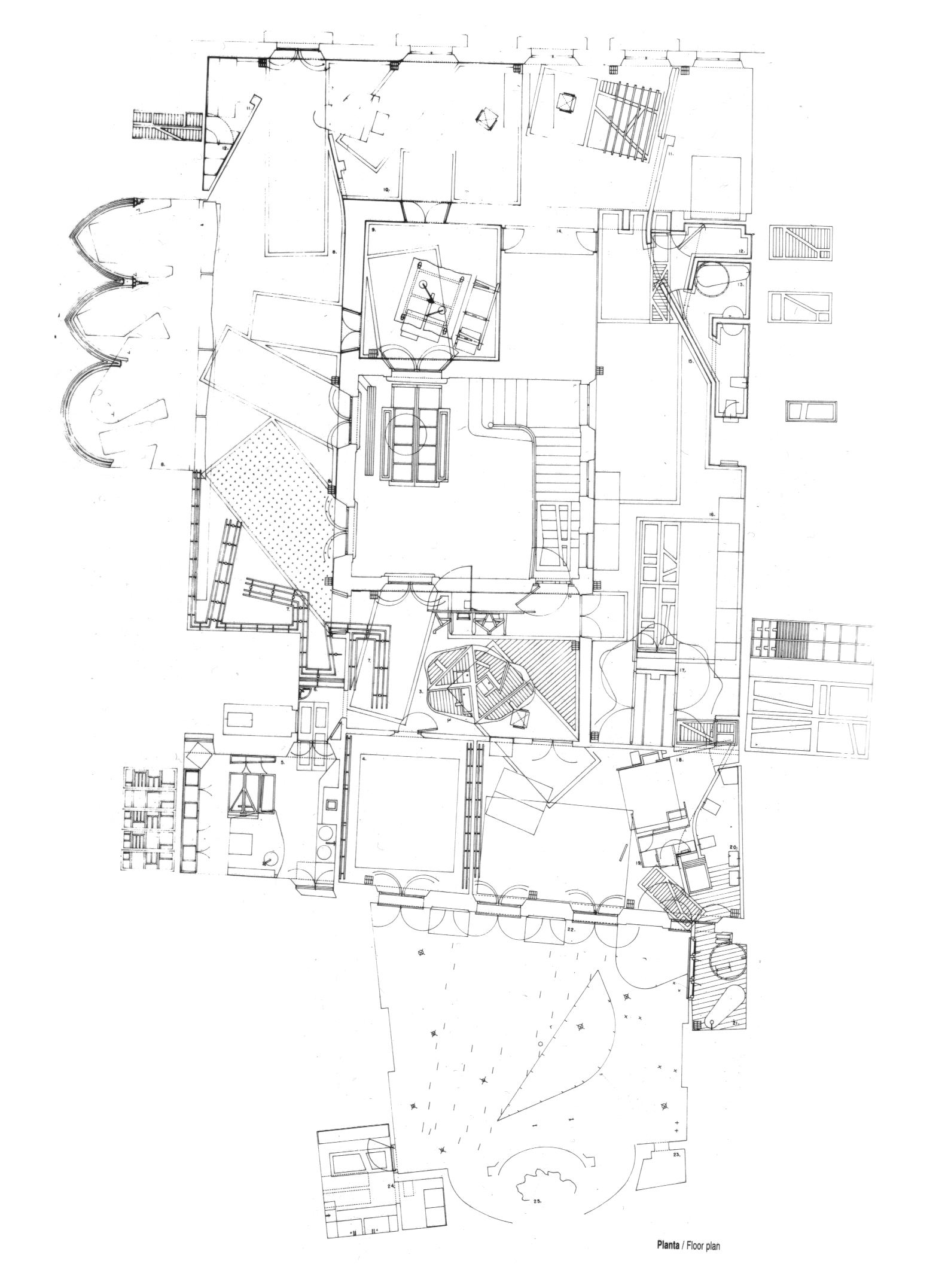 Where to Cut a Plan

Where NOT to Cut a Plan