Similar to this workflow that shows how to draw a plan from scratch, this workflow emphasis proper techniques for tracing an existing digital drawing for purposes of analysis or presentation. These could also be helpful in cases of re-creating digital models from working drawings for other purposes like modeling making or digital analysis. This workflow emphasis organization, precision and making good judgement calls when tracing - such as alignment and consistency.

Bringing in Artwork to Rhino

Within this workflow, we will be tracing a raster image of a building drawing. These may include the following image file types: .bmp, .tga, .jpg, .jpeg, .pcx, .png, .tif, and .tiff. Certain file types, such as .pdf, may include both vector AND raster information - therefor you may want to try opening the file in Adobe Illustrator to see if any of the linework is already in vector form.

After opening Rhino, the first step to tracing a drawing is to bring the rasterized image into the workspace. We will be working in the TOP view for the entirety of this drawing. There are two ways to bring in artworks: 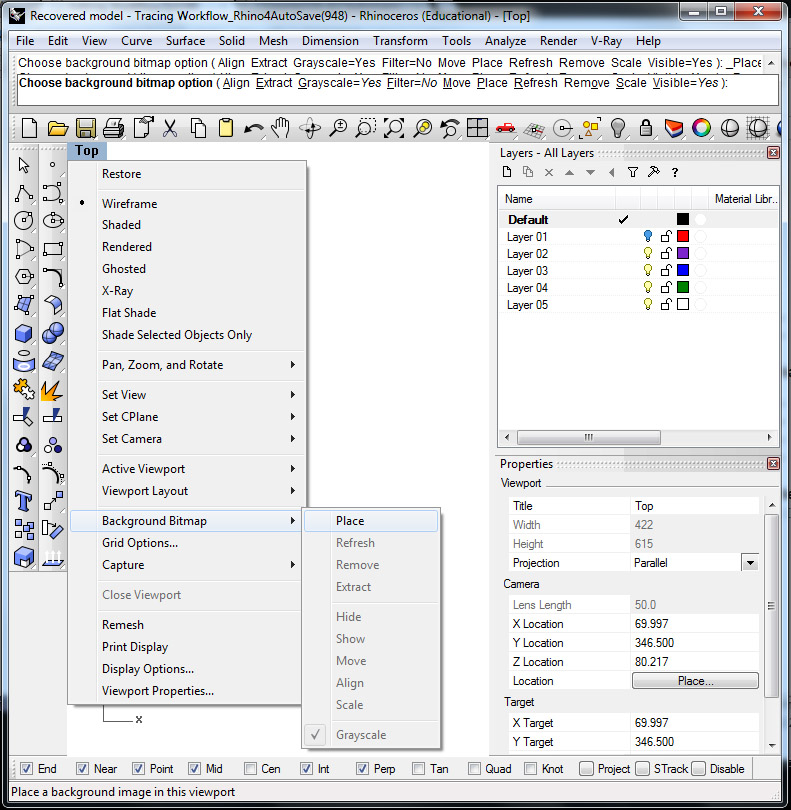 Background Bitmap turns an image file into part of the backdrop. Once the image is placed, it is no longer an object in the workspace. The image automatically is converted to grayscale and only exists within this viewport.

To do this, right click on the viewport toolbar and select "Background Bitmap > Place" or type into the command line "BackgroundBitmap". Select the image you would like to place. Return to this command to edit the image later. 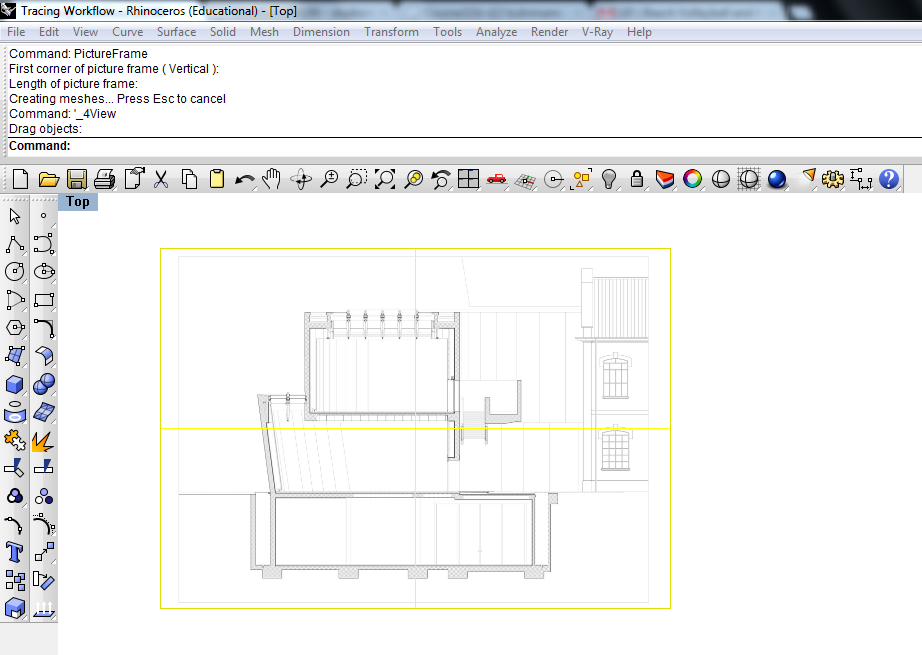 Picture Frame brings the image file in as a textured surface and is therefore an object in the workspace, visible to all viewports.

Use the command "PictureFrame" to place the image. To edit the image, select the object as usual. If the image is not showing up, change the dispaly mode for just this object with the command SetObjectDisplayMode . Change to "Rendered". 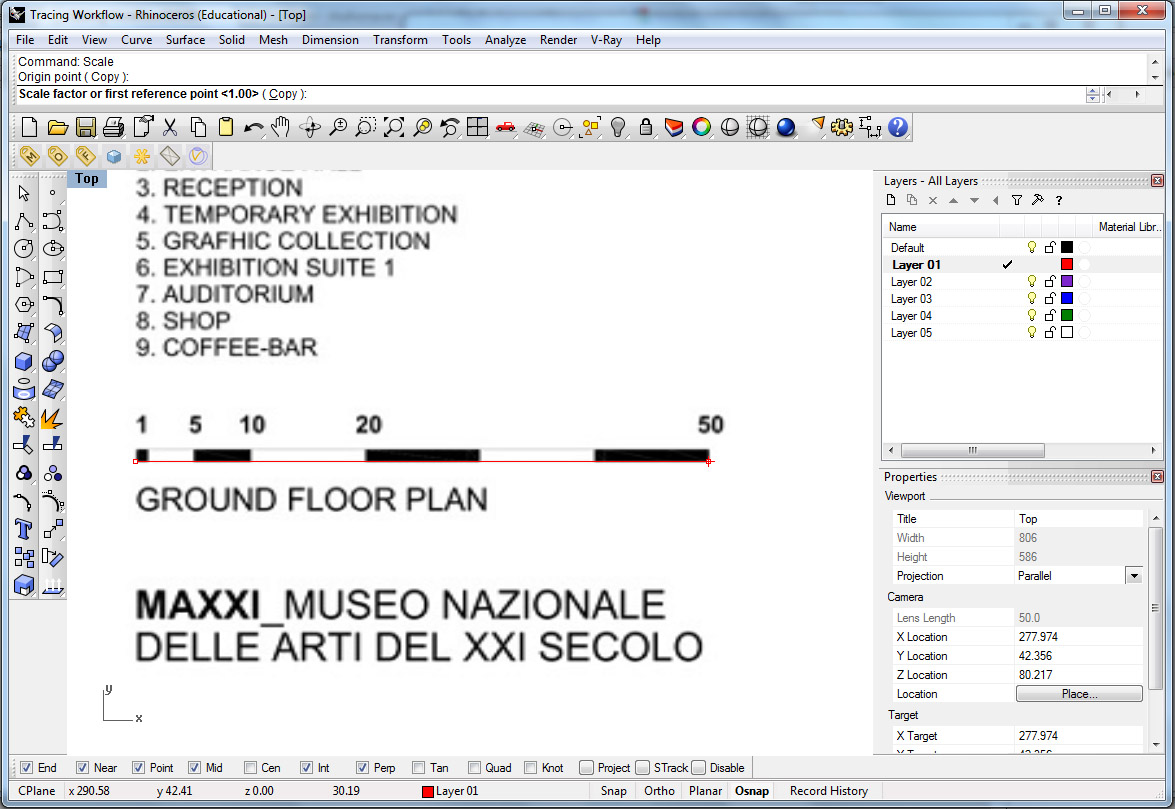 Before actually tracing the image, it is important to size it correctly so that as you draw, you can reference specific measurements and have an understanding of what scale drawing you are making. Check the Units by typing Units in the command line. Make sure that the units you desire are those of the actual building scale (NOT the drawing scale - we will export to this scale later). It is also nice to have the Decimal Display set to Feet & Inches.

Find a reference of scale on the image. This may be a dimensional marker or a scale on the bottom of the image. Scale the image according to this marker by typing in the measurement listed when using the Scale button. Double check the scale by using the Distance command over the same referenced measurement.

Do not have any reference of scale on the image? Consider the following typical conventions:

Set up the Layers 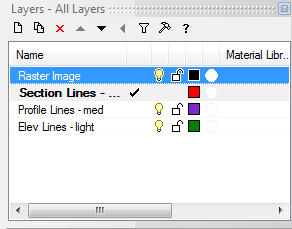 Layer organization is key for a good drawing, especially as the work becomes more detailed. Architecture offices are usually very particular about layer titles and maintenance. Check out this website for a listing of typical layers used in a drawing. Notice how many of the layers have the same display color, which organizes the lineweights when the drawing is plotted (for example, all magenta layers are used on detail layers and would probably be given a 0.125 pt linetype). For more information on line weights, see this Tool page .

To create new layers, simply select the new layer button in the layer tab of Rhino. You may chose to coordinate the layers with lineweights or object types to help quicken the process when you export the work to Illustrator. Because you are working with an existing drawing, you can probably identify the different lineweight types and organize the layers accordingly.

Double click on the section layer to start drawing.

Prior to tracing, make sure that the proper [[cmd|OSnaps}} are on. This will help your precision so that lines are snapping to each other properly and not floating in space. 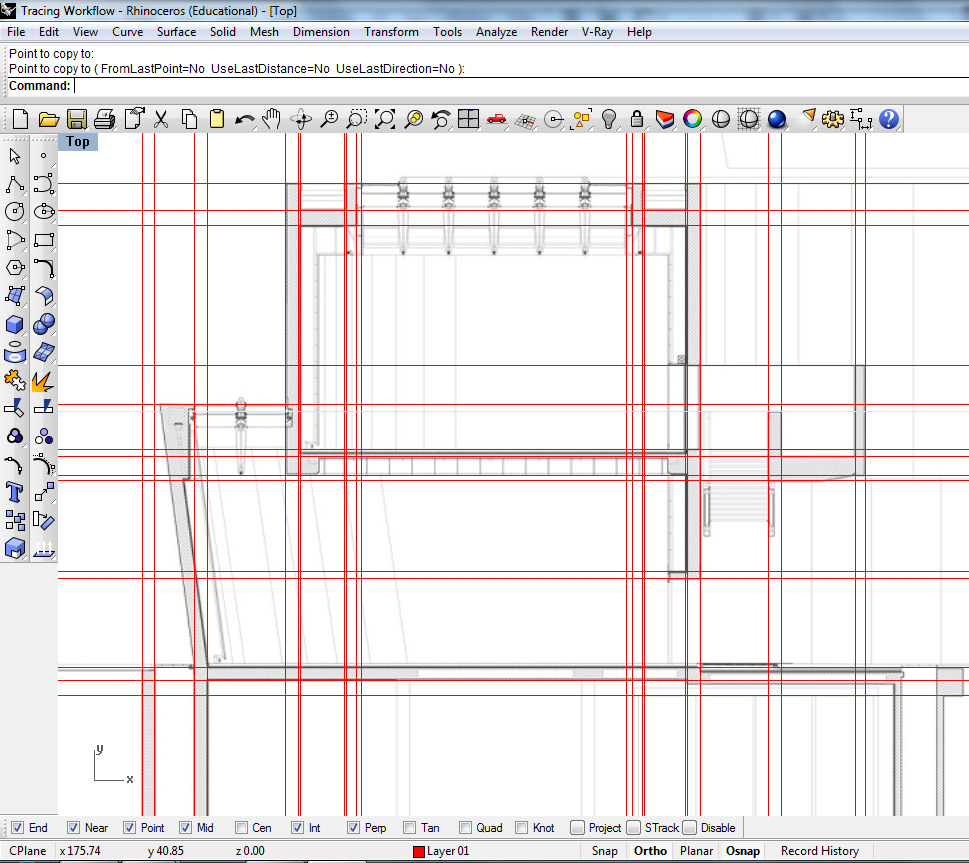 Start by tracing the darkest lines in the drawing - the section lines. These will probably set up the basis of the drawing by outlining the major parts of the building. Use the Polyline tool to start tracing. For curves, use the InterpCrv which makes curves through points.

Rather than outlining one part at a time, work by tracing the tracing as a whole by creating construction lines or outlines of the major parts of the building. Work with Ortho on and find all the parallel lines. Identify wall thicknesses that are the same and ensure that you are copying or offsetting sets of lines together to ensure consistency. Extend linework across the page as much as possible and copy the linework throughout the drawing before trimming with perpendicular lines for openings. You may find that some of the lines match elsewhere in the drawing.

For those new to Rhino, consider using some of the following commands:

On many drawings, the section lines are filled with an inner poche. If you would like to replicate this, make sure that all the lines tracing the section linework are closed polylines so that they can be later filled when working in Illustrator. 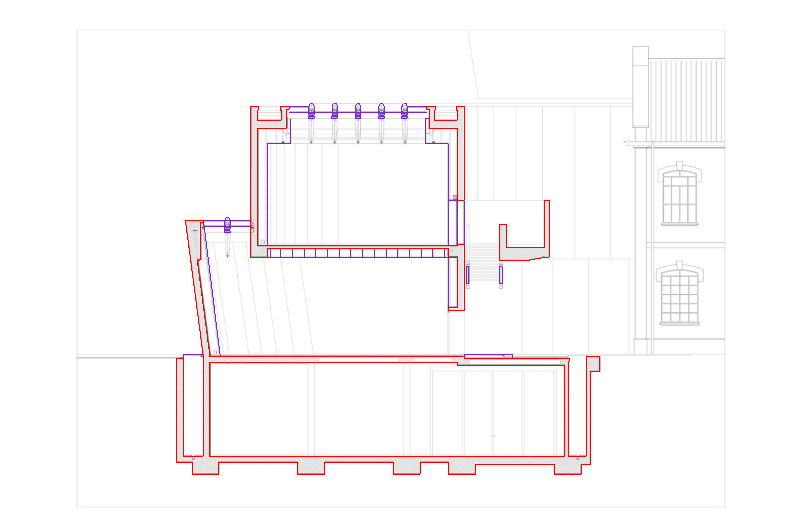 After the section lines, fine the next darkest lineweight to trace in the drawing. These might include the overall outline of the building, walls or doors seen in the image or darker details such as window mullions or structure.

Double click on a different layer so that these are kept separate from the Section Lines. 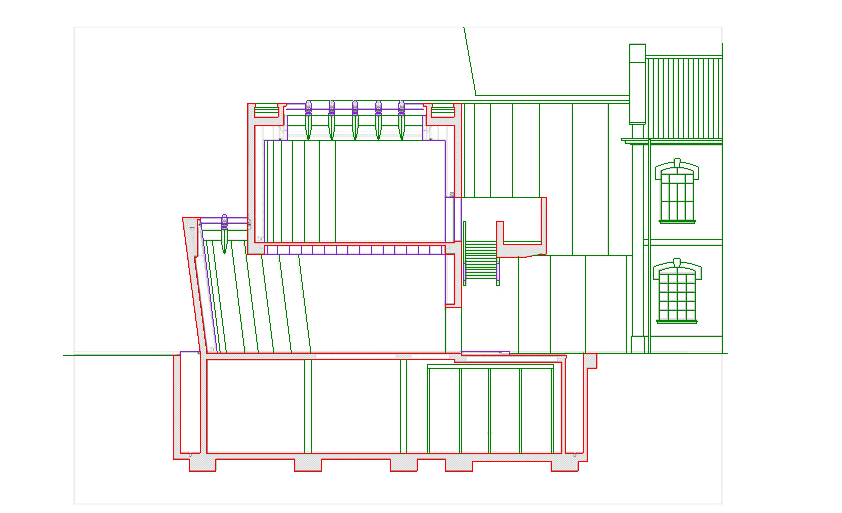 Elevation lines are the lightest lines in the drawing that includes objects seen in the distance, such as an entryway or a piece of furniture. When tracing these elements, consider what is necessary for the drawing and what could be drawn differently. Some of the details may be hard to read depending on the quality of the drawing, therefor you can decide whether or not to draw it differently. For example, furniture can be simplified, doors can be drawn open instead of closed. Consider the scale of the drawing you could like to make when drawing in details such as the mechanics of a window frame or floor details.

Other types of lines that should be individually grouped include dashed lines, usually representing hidden items (such as those behind or above the section cut) and other reference markers (section cut lines, structural grid, etc). Every time you trace a new type of line, be sure to make a separate layer for it for easy exporting later on.

Check to make sure that your Units are correct - both the unit of measurement as well as the display settings. Note that it is difficult to perfectly scale the drawing - when double checking the distance, the measurement might be off by 1/4'.

Rhino Tutorials & User Guides : A variety of links to helpful tutorials and downloads by the makers of Rhino, McNeel.