First way - Blending the site by connecting side edges : Cut into the site using a larger bounding box than the building itself. Create a Rectangle and then Trim the site itself. Then use the EdgeSrf command to connect the site to the foundation of the building, one side at a time.

Second way - Using serial sections to loft new ground surface pieces : Split off a whole section of the site using either projected linework or a CutPlane . Then create serial sections with this pieces along the x or y axis using the Contour command. Make sure the end edges are duplicated using the DupEdge command. Once you have the skeleton of the split surface, Delete the surface piece. Then transform the linework to suit your needs, either by moving the control points POn or moving the entire line down to the edge of the building. Once the linework is create, Loft the lines to create the final surface.

Using your digital model, the process for making plans and sections will be very similar to how you made drawings of your double negative project with added emphasis on architectural standards and conventions.

The images below will help you to understand the concept of orthographic drawings in the architectural context with basic examples of each drawing type.

Plan (Cut plane created in the Right or Front view)
Plans should be cut 3 feet above the ground floor.

Majority of the time working on your drawings will probably be spent cleaning up the Make2d output and assigning lineweights. These lineweights are crucial in helping your drawings read properly. Notice the differences in the drawings below: 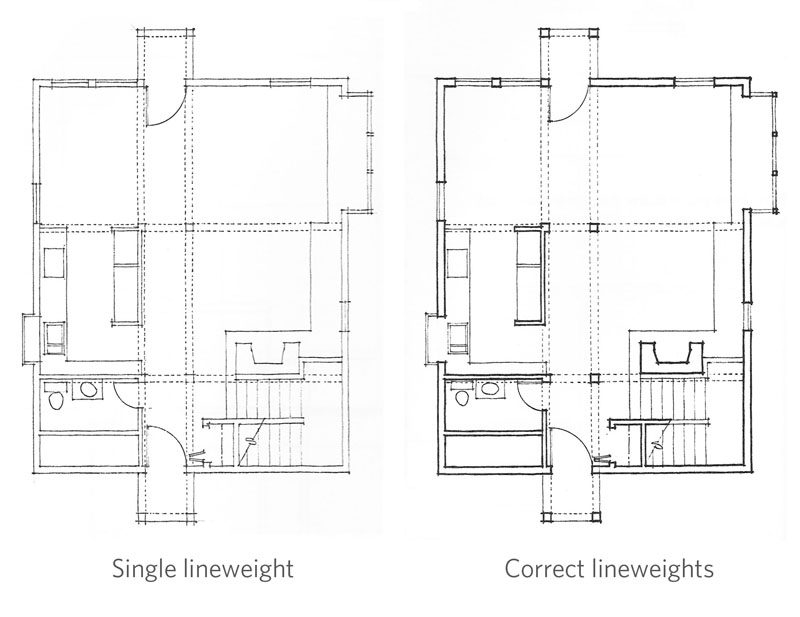 Use your experience from past projects to coordinate lineweights, especially regarding what lines were too thick (no thicker than 2 pt), what lines were too light and didn't show up (less than .12 pt will not print) and what hierarchy helped your drawing read properly. Refer to the lineweight distribution below for reference:

In addition to cleaning up linework and designating proper lineweights - additional details will need to be added to your drawing to exemplify architectural standards. These include editing stairs and ramps to denote direction, noting the above elements and adding detailed elements such as door swings and furniture.

Stairs
When cutting a plan, about five steps should be left in the Make2d output - hoewver this is not how stairs are typically drawn. Rather than a horizontal cut line, stairs are most often drawn with a diagonal cut line. The remainder of the stair is then shown by dashed lines representing what is above. Stairs below are in full view and should be shown as a complete set of steps.

Ramps
Ramps are also often cut off at an angle to represent the section cut with large diagonals placed in the width of the ramp. Dashed lines should show the ramp continuing into the space above.

Above content
Important elements that are above the cut line also need to be represented as a dashed line. These include overhangs, the continuation of stairs and ramps, etc. Rather than deleting half your Rhino model when creating plan cuts, be sure to hide it so that you can refer to it later. The above linework should not be confusing - be sure to simplify the linework to a simple outline of the object.

Fitting a Design into an Existing Site Model
Students must re-model the site itself to fit the stair and ramp model on top of it.
Final model should be uploaded to bSpace by the end of class, Friday October 5.

These workflows are here to help over the weekend with drawing:

Creating clean drawings from a 3d model .
Very similar to the workflow creating drawings of the double negative, this takes you through the steps to produce plans and sections of a building model.

Designing with and Finalizing Extracted linework
This workflow goes beyond the basic process of Make2d to discuss the importance of editing and adding on to linework to produce more detailed architectural drawings.

Imprecise Linework + Model building
Snaps : Having OSnaps such as End and Midpoint on are extremely crucial in being precise when drawing in Rhino. Having ALL the snaps on though can lead to imprecise model making. Be sure to have Near OFF.
All forms in the 3d model should have some element of THICKNESS.
No material is infinitely thin as the single surfaces in Rhino. Be sure to OffsetSrf or Copy surfaces over to represent the thickness of the material.
Difficulty zooming into model
Every so often you will need to reset your view when you are zooming in on parts of your model. Two important ways to do this: