In this course, Rhino 4.0 will be the primary modeling program that we will use to create orthographic linework, architectural diagrams and perspective drawings.

As part of the Wiki, feel free to browse the Tools page on Rhino to find more information on the entities, interfaces and methods specific to the program. We will be referring to these often as they come up in the course.

Rhino is unique in that it creates NURBS based surfaces , in contrast to Meshes. NURBS allow for more complex geometries to be calculated with much less information, according to control points that are often not touching the surface itself. 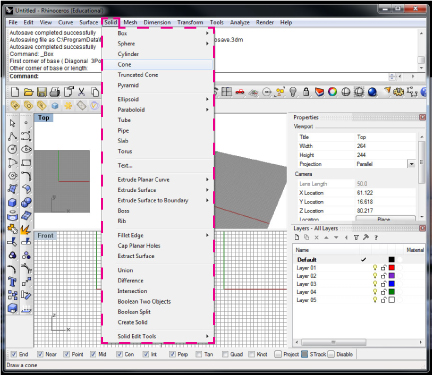 Solid modeling is based on a variety rational surfaces that create perfect geometry based on an equation. These objects are usually closed polysurfaces made up of one or more surfaces. 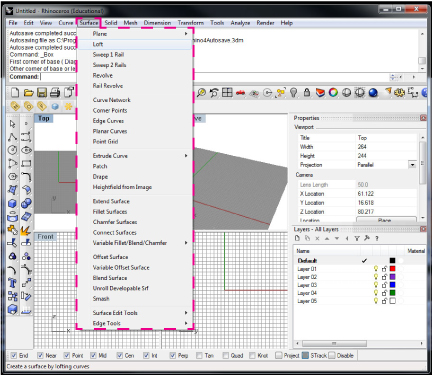 Many of the surface commands require inputs of existing linework. There are various ways of modeling surfaces, which may have to do with precision, smoothness, water-tightness, or something else. All of these commands can be found under the Surface option in the toolbar.

Plane, Plane (Vertical), PlanarSrf, PlaneThroughPt, CutPlane
These are essential when you need to create a planar surface - which we often need to represent something physical such as a wall or a piece of chipboard. These also require our linework to be planar - which might require Make2d or Project to Surface.

ExtrudeCrv, ExtrudeCrvAlongCrv, ExtrudeCrvTapered, ExtrudeCrvPoint, Ribbon, Fin
When working from existing linework, such as a plan and section, these extruded tools are very easy to use.

Non-Planr Surfaces
SrfPt, EdgeSrf, Loft, Revolve, RailRevolve, Sweep1, Sweep2
When simple extrusions won't work, these tools allow more control as to how the curvature is extruded along the linework. These also come with their own tool menu to allow for more precision or smoothness.

Boolean operations are editing tools specific to solid objects. These can be great time savers especially for the double negative. Type Booelan2Objects and select two objects to go through the different options.

Having problems with your Boolean operations? Sometimes this has to do with out the original geometry was constructed. See this McNeel page for more assistance.

Exercise: Practicing the Three Modeling Methods
This exercise must be submitted to your bSpace dropbox by the end of class. Files should be titled as follows: "Lastname_Firstname_Exercise1.3dm"
The emphasis on this exercise is to show that you are able to work in 3d space and have practiced using different commands to create surface geometry. Do not obsess about the final forms created here - instead spend that time focusing on your double negative model for studio.

Different forms and projects will cater to different physical modeling strategies, to be discussed further in studio. Below are a variety of tools helpful for creating physical models from an existing digital model: 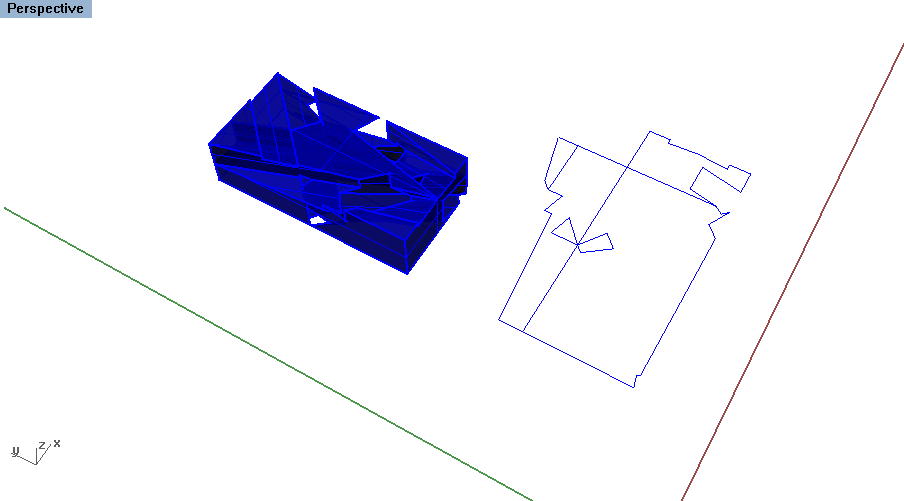 UnrollSrf or Smash
This takes a polysurface and unrolls on the XY place to create a origami template for creating the model. While it sounds ideal, the more complex the geometry becomes, the unrolled surfaces have a tendance to fold back upon itself. To make things easier, Explode the original Polysurface and Join different segments together to UnrollSrf . Note: the resulting geometry does not account for thickness.
Smash is a very similar command made for objects that have some slight curvature inherent in them (and therefor not typical for an unrolled surface). Test this command if UnrollSrf does not work. 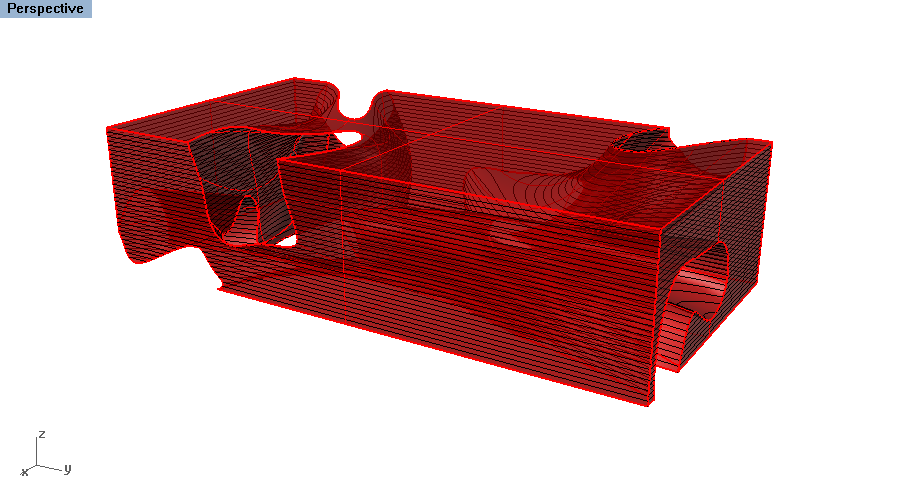 Contour
Laminated models are a create tool for creating curved geometry. Use the Contour command to set up serial sections that occur alongside an object according to set distance.