There still seems to be a bit of confusion with several aspects of plan and section drawings.

Please see this page for a recap, and take a look at the example images below. These images are presentation drawings taken from a variety of architects.

In all methods of architectural representation, it is important to communicate not just the "facts" of the design, but also the intention behind the design. This holds true for physical models, and especially for site models in particular. It would be a missed opportunity to consider a site model as just a 1:1 representation of your design's surrounding context. Instead, the site model is a way of reinforcing and extending the logic behind your design. The way you choose to construct a site model should therefore be closely related to the concept and methodology of your design. This will help your design relate better to the surrounding context (both visually and conceptually) by establishing some sort of important relationship to the site.

Before attempting to prepare any cut files, several steps must be taken to ensure that the digital model is ready.

One of the most important steps is preparing the ground surface so that it is a closed polysurface , instead of a floating plane. This essentially means we must "box out" the ground surface by creating side walls and a bottom surface so that it becomes a solid object. Additionally, we must fill in all of the holes where the building footprints are and join everything together into a closed polysurface.

For today's workflow, we have already completed these steps, since they can be rather time-consuming. However, you will have to complete these steps for your own site model in the future, so check out this workflow to follow along.

Today in section, we will cover three main methods of building physical site models, one of which you are probably already familiar with (laminating). The other two (unfolding and surface modeling) will probably be extremely useful for the group site model that you are building in studio.

Lamination is a method of physical modeling that involves stacking pieces of material on top of each other with no space between them.

The most important decision to make with lamination is the orientation. For example, I could model a rectangular building by stacking horizontal pieces on top of each other, but I could also model the same building by gluing vertical pieces together. The decision about orientation can help reinforce some of your design ideas. For example, should the lamination of the buildings be oriented the same way as the lamination of the ground surface? Why or why not?

The process of lamination involves using the Contour command to create sections through the polysurface. Material thickness is very important, since this determines the spacing between each contour. For example, if you are using 1/8" chipboard to build your model, then your contours should be spaced 1/8" apart. Make sure to measure your material very carefully if you choose this method. 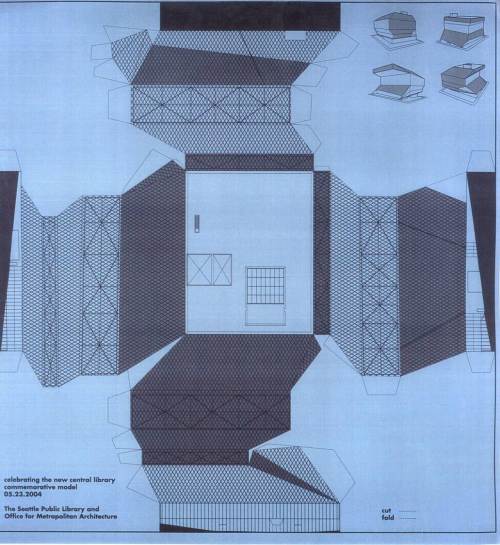 Unfolding a polysurface enables you to flatten all of the individual surfaces onto a single plane, while still maintaining some of the connections between them. It's the architectural equivalent of a bear skin rug--taking all of the bear's skin and laying it flat on the floor, while keeping it intact as a single piece. The benefit of doing this for physical models is that the surface can then be cut out of a single piece of material and folded back into a closed polysurface.

This method uses the UnrollSrf command. In the command line, there are several options to alter the way this command is performed. The Explode option is probably the most important. This determines whether the individual surfaces are separated and lined up next to each other, versus keeping all surfaces intact as a single piece. For the unfolding process, we do not want to explode. The other important option is Labels . If selected, this will label each surface edge so you can understand which edges were originally joined together. This is a useful option when unrolling very complicated polysurfaces, but is generally not necessary when working with simpler forms.

This technique minimizes the number of glued surface edges, which tend to be the weakest and sloppiest parts of a model. Instead, it replaces many of the connections between surfaces with a fold, which is cleaner and more precise.

When using the UnrollSrf command, it's important to consider the thickness of the physical material you are modeling with. This technique as described above is for folding paper models, where the material thickness is essentially negligible. For thicker materials, surfaces will need to be trimmed in order to account for the thickness of the adjacent material. This is one reason why it's helpful to have the digital model scaled down to the actual size of the physical model.

This Rhino file walks through the basics of how surface modeling works.

The Surface Modeling technique allows you to restructure the geometry of complicated surfaces. It is essentially the process of tessellation--taking a curved surface, and rebuilding it with a series of small triangles. This is a good way of approximating a curved surface, though it will not be exact. However, for physical modeling purposes, this is often the best way to tackle complex, curving surfaces.

This method starts by using the Rebuild command. The rebuild command allows you to change the number of Isocurves that Rhino uses to calculate a surface's geometry. Remember that isocurves are the secondary gridlines that appear on all surfaces in Rhino. To make sure isocurves are turned on, check the Properties panel and make sure that the Isocurves Visible option is checked when the surface is selected. Then, change the number of isocurves in the X and Y directions, and check the Preview button to make sure it looks how you intend. It is common to have a different number of X and Y isocurves, depending on the surface's geometry.

The next command is to ExtractWireframe . This will turn the isocurves into actual curves in Rhino. (An alternative to the "Rebuild-Extract Wireframe" sequence would be to use the "Contour" command in both directions). You can then use the SrfPt command to create 2 triangular surfaces within each "box" of the gridlines, using the intersection points of the contours as the endpoints.

No matter which method is used to model the Rhino geometry, it's important to set up precise templates for cutting the material. These templates can used in 1 of 2 ways:

Either way, the cutting templates are basically the same. There are some key points to consider:

123 Make by Autodesk
This website offers a plugin that automatically creates file templates for both laminated and waffle models. Works best for simple forms.

For the workflow today, you must pick ONE of the three physical modeling methods that were shown in lecture. Choose whichever method will be most useful for your own studio project, and follow the corresponding workflow for that method.

All three workflows are part of the same exercise: Setting up Files for Physical Site Modeling