The drawings below are all copied from Francis Ching "Architectural Graphics."
Site Plans 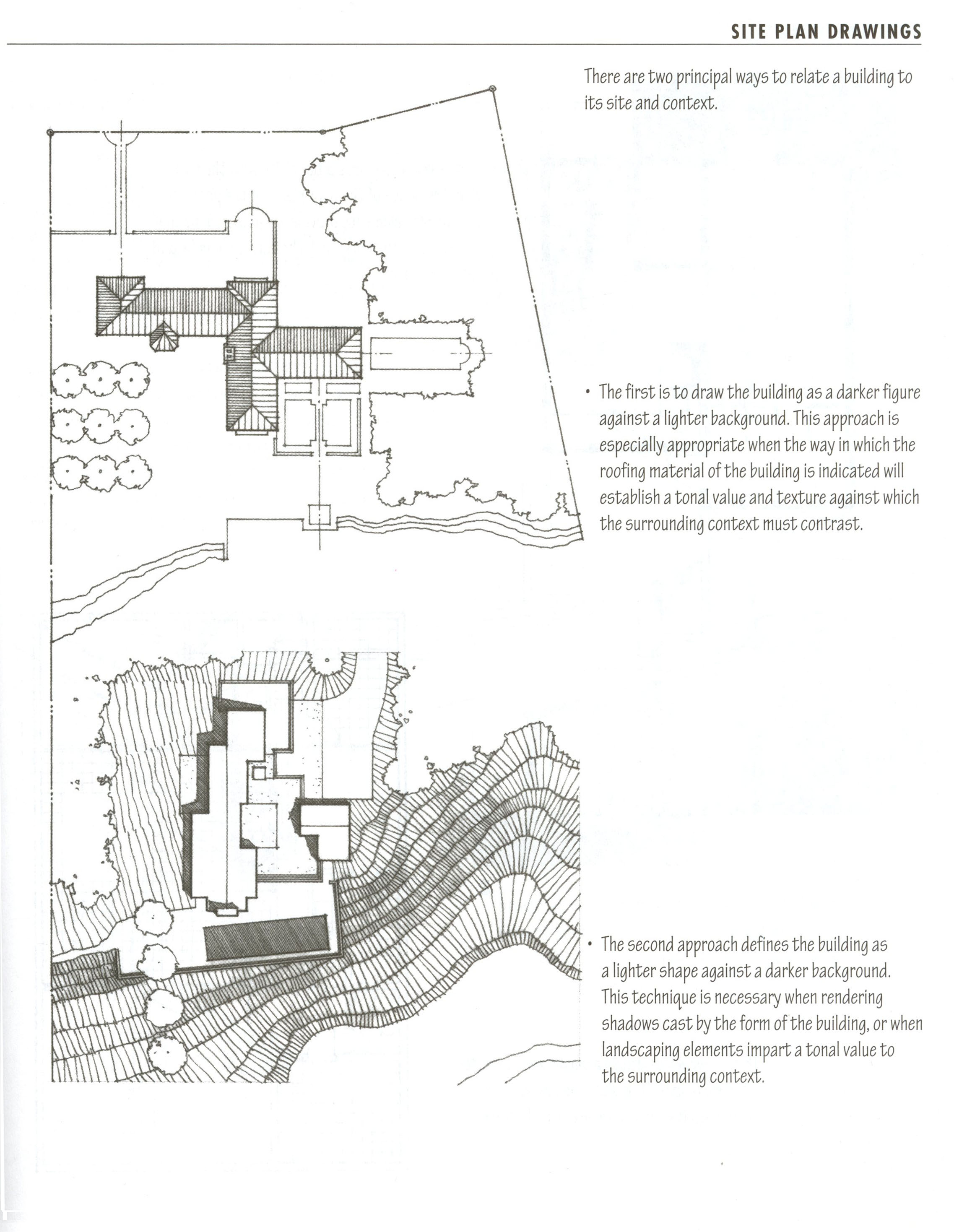 In general, site plans and sections cater to many of the same conventions we use in typical plan / section drawing: the closer the object, the thicker the lineweight. Detailed elements such as trees and sidewalks also become lighter.

Site plans are typically drawn as if from overhead with the roofs of the building like the examples to the left. Some prefer the building (the proposed design) to be cut through the first floor like the buildings in the Nolli plan, to show movement through the building in relationship to the site. Sometimes shadows are overlaid on top to help the viewer understand the relationship between the ground plane and the height of the building. This could be easily rendered using Rhino Render in the top view if the building and site are modeled. Contour lines are also there to represent the topology of the site. Each line represents a 5' or 10' change in elevation (usually noted in the drawing). 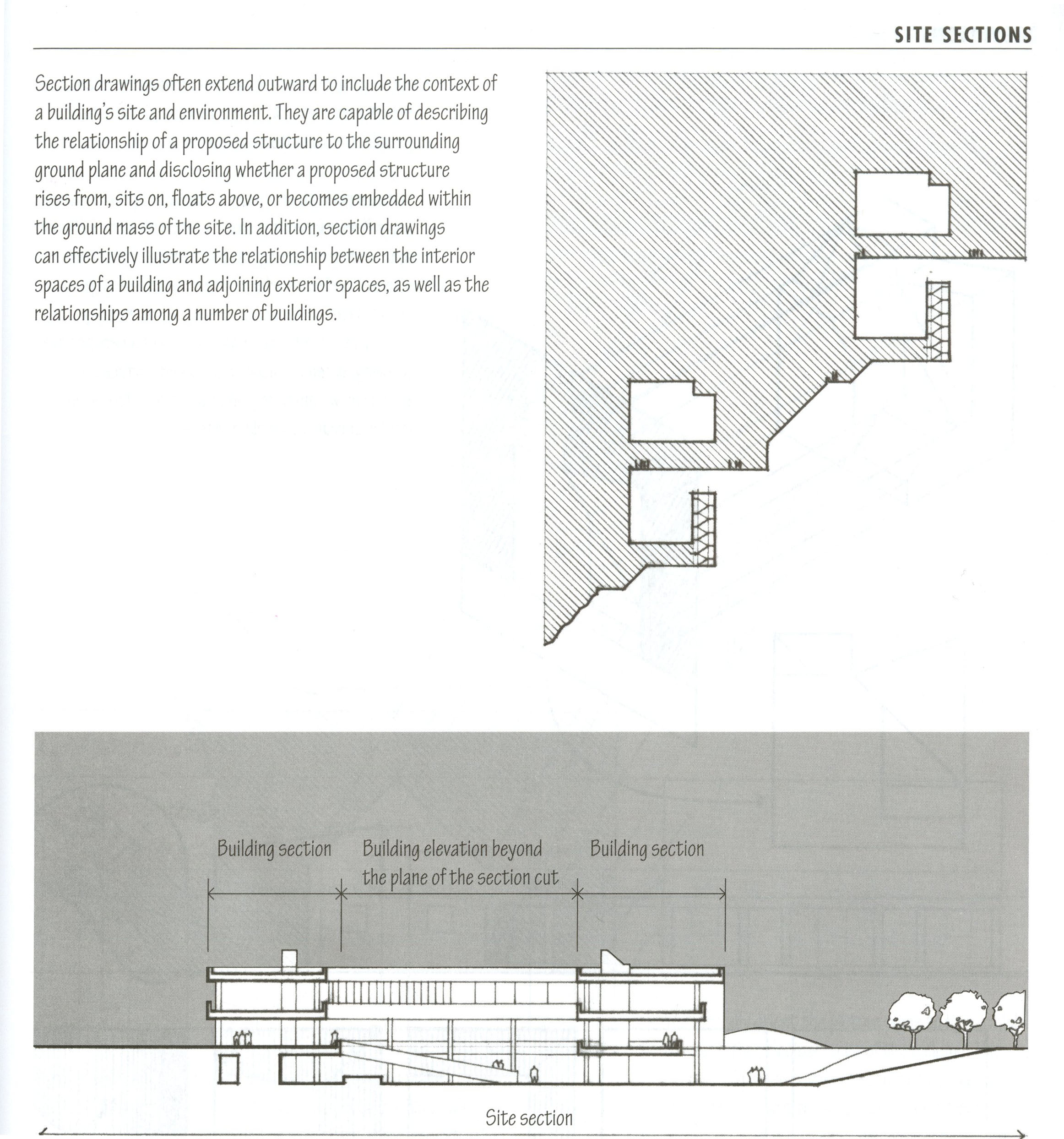 Site sections are sections cut through the site, including the neighboring buildings and the ground plane. These are often represented by a single line that continues through both the ground and through the building. Sometimes the building itself is given a poche to show the outline of the basement or foundation. If cutting through water, the section line would continue underneath the water as well - like along the bottom of lake or river, while another poche would show the height of the water 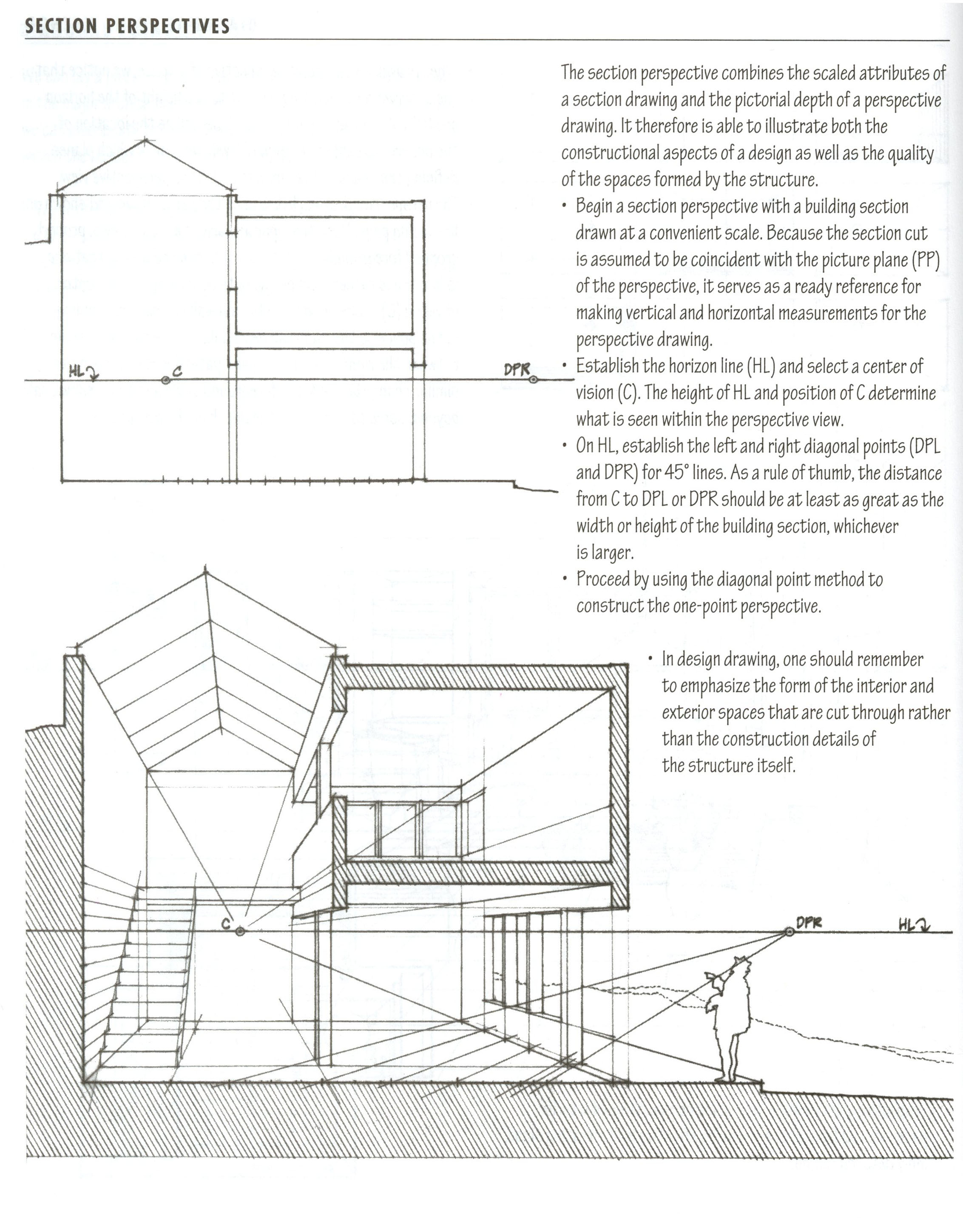 There are two ways to think about modeling the site:

Helpful Surface Commands + Modeling Tools
Scale and precision are important when modeling the site, therefor we will be reviewing the following commands as we review some 3d modeling tools. Many of these tools will be used in the following workflow.

Digitally Modeling the Site
This workflow describes the steps necessary to develop a 3d model and drawing of the site. Students will learn how to export and import data from/into rhino, scale to accurately reflect site data, collect and draw site information, organize layers and responsibilities to develop a 3D group site model and drawings.

Workflow - Drawing Site Sections from a Digital Model
This workflow will overview the Section and Make2d commands to create a site section drawing. Additional Illustrator tools will be added as well such as fills, background image and entourage will be added to create a finished drawing.

Exercise - Site Sections
This week's exercise asks you to use the existing site model to draw sections through the site. Some of this will overview previous skills learned such as the Section command and Make2d before importing the data into Illustrator.

This file should be printed out at 11" x 17" and turned into a bin on the 6th + 7th floor elevator lobby (right outside of studio). Your name and your GSI's name should be located on the lower right hand corner of this print out.

All final submissions are due no later than 5:00 pm on Friday, September 21st.

The following includes a list of tools that can be helpful for creating generic analysis or diagrammatic drawings in Illustrator:


Also - download this example Entourage Template which includes hundreds of silhouettes of peoples, cars and trees.

Having Difficulty with modeling or drawing the site? Check out some of these workflows that use many of the same tools that we will be reviewing in class:

Creating Contextual Building Elevations
This video workflow show how to detail surrounding buildings with windows and elevation elements to make the scene more site specific rather than generic cubes. This would prove helpful when creating street elevations and renderings your final design.

Drawing a Site Plan
Follow this workflow if you want to trace more information into the site plan using satellite images of the site.